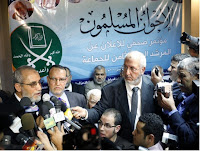 Writing at The National Interest, published by the former Nixon Center, Paul Pillar applauds the Muslim Brotherhood's newly balanced stance toward the Palestinian parties and says it's time for Israel get over Hamas' support for terrorism:

In private discussion with the Israelis, the United States should point out that if Israel is genuinely interested in a peace settlement with the Palestinians, what the Egyptian Brotherhood is doing is as good as it gets, especially coming from the biggest political actor in the biggest Arab state. If the Israelis are not genuinely interest in a settlement, a negative posture toward the Egyptian initiative will serve only to underscore to the world Israel's responsibility for the impasse. And if Mr. Netanyahu raises issues of Hamas's past involvement in terrorism, he should be reminded that if the United States applied a once-a-terrorist-always-a-terrorist standard, it never would have had any dealings with some who have occupied the positions he does now of Israeli prime minister and leader of Likud.