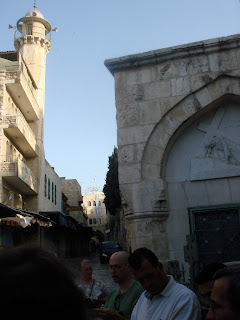 Jeffrey Goldberg (who's Jewish) describes Christmas Eve in multicultural Jerusalem. With Israeli friends, he went to services at the Church of the Redeemer (Lutheran) in the Old City and heard a German pastor read Luke's gospel in Hebrew. But that's not the half of it. Earlier in the day, he took one of his kids to see a doctor:

The clinic, called Terem, is well-known in Jerusalem in part because it was started by a physician named David Applebaum, who was killed in the September 9, 2003 terrorist bombing of a cafe in the Germany Colony neighborhood, along with his daughter Naava, who was scheduled to get married the next day. The physician who saw my son at Terem, like many of the clinic's physicians, is an Arab from East Jerusalem. In Terem, and at Hadassah Hospital, and the other hospitals in town, Jews treat Arabs, Arabs treat Jews, and no one thinks twice about it. No one who lives here, I mean. For visitors (even one, like myself, who once lived in Jerusalem), these sorts of commonplace facts of life -- Germans praying in Hebrew, Arab physicians treating Jews in a clinic founded by a terror victim, and on, and on -- can be astonishing.

It's hard to see clearly, but this photo, which I took in the Old City during a 2007 pilgrimage, shows a minaret on the left, a cross on the right (station #3 on the Via Dolorosa, "Jesus falls for the first time"), and (in the middle of the image, in the distance) a menorah.
By Fr. John at 8:56 PM