"Maybe Israel Has No Plan" 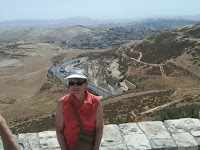 Jeffrey Goldberg on the new settlement construction projects Israel has launched in the West Bank, especially those, Ethan Bronner reports, "in more remote communities that are least likely to be part of Israel after any two-state peace deal":

I would like someone in the Netanyahu government to please explain the plan here. It would make things so much easier to understand if we just knew the plan. Is the plan to continue settling Judea and Samaria so that there is no chance whatsoever of creating a Palestinian state? And if this is the plan, then what happens to those Palestinians who are being denied a state? Will they be absorbed into democratic Israel, thus bringing about an end to the idea that there should be a single small country on earth where Jews can be a majority? Or are they going to be denied democratic rights, in which case, well, Israel as we know it will cease to exist. Or is there some other plan? Or -- maybe -- there is no plan. Maybe these things just happen.