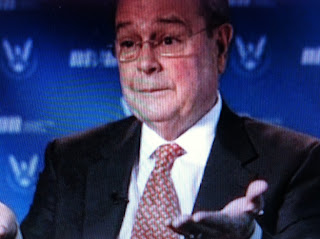 You may remember Sen. Howard Baker's 1973 question about Watergate: What did the president know and when did he know it? It'll be asked again when word gets around about operative Dwight Chapin's startling charge that Richard Nixon was present when chief of staff H.R. "Bob" Haldeman ordered Chapin to set up a dirty tricks operation during Nixon's 1972 reelection campaign.

Nixon always denied being directly involved in setting up the dirty tricks. In 1973-74, congressional and federal investigators tried and failed to find evidence to the contrary.

Chapin made his news-making accusation in an interview with Tim Naftali, director of the Nixon library. Go here and listen to Chapin talk about being buzzed into Nixon's office to get the fateful order, deciding to hire his USC classmate Donald Segretti to run the unit, and lining up Nixon's personal attorney, Herb Kalmbach, to pay for it.

The three went to jail as a result of the Watergate scandal. In judging Chapin's late hit, remember that he was convicted in federal court of lying under oath.

The interview appears among the background materials for the Nixon library's upcoming Watergate exhibit, which was attacked by Chapin's White House friends last summer. It will be interesting to see if the interview will be aired by C-SPAN along with Naftali's other revealing chats with Nixon's men.
By Fr. John at 10:10 PM

Interesting, isn’t it? And an important test – if not the key test -- for the new Watergate exhibit that NARA’s Nixon Library director Tim Naftali has prepared for display at the library. Tim’s endeavor displays what oral history is all about, gathering the recollections and views of multiple players. And then sharing them with a public which makes up its own mind about the contents. And, in its own differing reactions, tells us something about the people who vote others into office.

This one will be a tough one for anyone who worked with Nixon. Regardless of who ordered the dirty tricks, there was a dirty trickster associated with the campaign. So Nixon’s associates face some challenges. Decisions on campaigning are revelatory. They speak to culture, to character, to tactical judgments. Those elements affect policy making, also. You don’t become a totally different person outside of campaign mode, although there may be areas on your life where you toggle back and forth a bit. Many of us present somewhat different faces to different people.

Some observers may say of dirty tricks, they, that stuff happens. To others, Segretti’s actions, like those of Dick Tuck, may come across as silly, lame, immature, frat boy stuff. There aren’t many workplace cultures that encourage this sort of thing. But in the world of campaigning, as Chapin points out, it can seem like just another tool in the tactical toolkit. “They did it to us, we’ll do it to them. So, there!” It may come to seem “normal.” Especially in a payback oriented environment, where taking the low road is just part of doing business. And not doing so may be seen as a handicap, not as a virtue. An important glimpse into a culture and a mindset.

I wonder if this is one of those things that Haldeman was talking about in general terms (not naming dirty tricks) when, after having served his prison term, he talked to us at NARA in the 1980s. On the interview he did with us, he pointed to the pros and cons of having so many young aides in the Nixon White House. He appeared to strike a cautionary note, for good reason.

It’ll be interesting to see what the reaction will be once the exhibit goes up, if it ever goes up, that is. Since you’ve been reading my blog, you know why I’m wary.

My interpretation of Haldeman's comment in the 1980s-era NARA interview was that he meant when you have so many young aides, they are loyal and committed and they jump to it when suggestions are made, directives given. He implied that while that seems desirable, it can lead to trouble.

Why? I think he meant that a Bryce Harlow or a Len Garment and a John Mitchell (as James Rosen describes) might find a way around some things that a younger man, a Chapin or a "Bud" Krogh might not. Krogh discusses this at length in his 2007 book. Krogh mentioned how intimidating and also awe inspiring it was to meet with Nixon. But the Plumbers effort was one of the things that led to his downfall. At-will employees certainly face some challenges that civil servants do not. All too often overlooked in bureaucracy bashing, unfortuantely.

I'm intrigued by your comments about Haldeman. Those who've listened to the tapes extensively say that Nixon's racial and ethnic commentary was worst in his conversations with Haldeman and Colson. The latter, as you've written, repented of his excesses. In my contacts with Haldeman in the early 1990s, right up until the time I ran into him in Santa Barbara a few weeks before he died because of an untreated abdominal cancer, his focus was never on anything he or his men had done but instead on promoting the idea (with which I too flirted, I must say) of John Dean as the ultimate villain, as described in Silent Coup. He said that if people would just accept the alternate theory of Watergate, they would see that Nixon, he, and the others were more sinned against than sinners.

Yes, it is interesting about Haldeman, isn't it? There's something about that environment at NARA -- first physically, then intellectually -- that led him to open up to us. He talked to us at Pickett Street off the record and then for the audio tape of a long series of oral history interviews. Perhaps it was related to the knowledge that we had listened to all the tapes (by then), had heard all his diary dictations, and had studied the files of the Nixon administration. Perhaps that lessened the BS factor. Or was the fact that we were historians. Or something else. Of course, we always dealt with him in a cordial, professional manner. Somehow, he gifted us with considerable candor. I was the one that transcribed the oral history transcript. It is available at NARA NLRN, it's listed but not posted on the website. Years ago I tried to obtain a copy from NLNP at Archives II but was told I had to come in and copy it myself on the shared, at-cost copiers in the research room. Knowing it runs hundreds of pages, I never could figure out how I could hog the copier that long. So, sadly, I don't have a copy of my own publicly released work product, Oh well, samll thing, I just can't look up the passages I recall.

oops that anonymous was MK of course