Two views about the progress toward political and economic equality for gay and lesbian people. At the "American Spectator," George Neumayr (left), reflecting on the repeal of DADT, discerns a hidden, even malign agenda:

[T]he repeal is an elitist, not populist, victory, one which a future Edward Gibbon will mark down as yet another illustration of an insular political class's delusion and decadence at a time of terrorism. This elite has long wanted to tear down the military and turn it into a laboratory of political correctness, and Obama has smuggled this gift to his friends through 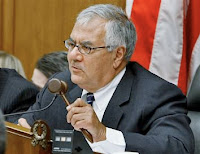 the backdoor of a lame-duck session.

Whereas Rep. Barney Frank says the gay agenda is no secret:

Neumayr's denunciation of the undemocratic, underhanded DADT repeal seems strange in view of a recent poll showing that 77% of the American people favored permitting homosexuals to serve openly in the military. Wouldn't ignoring the people have been the undemocratic and underhanded thing?

This seems too easy, so I must be missing something. Or maybe some conservatives have been stunned into incoherence after having been part of an historic GOP victory last month only to watch Barack Obama win a massive second stimulus bill (which is already helping spur economic recovery), DADT repeal, health care for Sept. 11 first responders, and the ratification of the U.S.-Russian arms control treaty.

Each measure required Republican leadership and votes. While the far right spent the month denouncing those out-of-touch Beltway Republicans, they're the ones who seem to have their finger on the people's pulse. Meanwhile, just as Obama made the mistake of thinking his 2008 victory amounted to a mandate for massive change, many conservative ideologues think the American people now want leaders who think like George Neumayr. But we've been clustered around the great American center all along, right where our polarized politics abandoned us.
By Fr. John at 11:53 PM