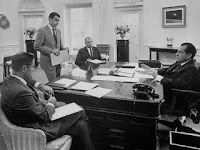 There's irony or aptness, depending on your perspective, as Dwight Chapin returns to his alma mater, the University of Southern California, to participate in a Nixon foundation co-sponsored panel discussion about President Nixon's China initiative. A 1963 USC graduate, Chapin hired classmate Donald Segretti to run dirty tricks during Nixon's 1972 reelection campaign. It was often said that they first stocked their bags of political tricks as undergraduates.

Chapin was jailed for perjury in Watergate's wake. He's making news at the Nixon library by charging that Nixon was present when chief of staff H. R. "Bob" Haldeman gave the order to create the dirty tricks unit. Until now, Nixon was never directly implicated.

Nixon's foundation is currently enjoying a Haldeman renaissance. Joining Chapin at the USC event will be Haldeman's aide Larry Higby, who also features in the library's proposed new Watergate exhibit.
By Fr. John at 2:25 PM

Chapin also appeared at the February Nixon Foundation
legacy forum Interesting session in some of the messages and metamessages. Mixed bag, some very useful information, some that made me go, hmmmm. I’m not sure some of the participants realized everything revealed by some of what they said. Larry Higby did pretty well, in my view.

As to “dirty tricks” and young men in college, hmm, something to ponder there. I’ve always thought that George W. Bush would have won the most votes in 2000 (as opposed to winning only the electoral college) if he had made an Obama-in-Philadelphia-in-2008 type speech decrying what was done to John McCain during the South Carolina GOP primary. I’m thinking the smears about his having an illegitimate mixed race child, etc. The sorts of things Lee Atwater appeared to speak against on his death bed. It actually would have fit with the 2000 Bush theme of “compassionate conservatism” and served to push back against the high schoolish bullies and “mean girls” vibe that sometimes envelops or defines politics. (Most Americans would hate to have done to them on the job what often is done on the seamier edges of politics to those who run for office.)

In 2000, as in 2008, my sense is that a lot of voters were looking for a better way to do things and that a “high road” approach might have met with approval among enough voters to give Bush a win in the total vote count. But it was not to be. People who take their cues from the political world sometimes seem to lose touch with how ordinary people resolve issues in their own offices and among friends and family, I think.