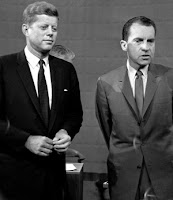 Reacting to Ted Sorensen's recent paean to 1960 debater John F. Kennedy, anti-Castro writer Humberto Fontova criticizes the Democratic nominee's use of inside information to get to the right of Richard Nixon on foreign policy:

Take Kennedy’s claim that President Eisenhower had fallen asleep (or gone golfing) during his command and allowed a perilous “missile gap” to grow between the U.S. and the Soviets. In fact a huge gap had grown (roughly six thousand for us, three hundred for the Soviets)

Might this qualify as an “outrageous claim” by Kennedy? Not if your source is Ted Sorensen and the New York Times. In fact, prior to the debates, CIA director Allen Dulles had briefed Kennedy on the genuine missile numbers. But rather than respond to this genuinely outrageous claim, Nixon bit his tongue. Disclosing the real number (that JFK knew perfectly well) in public would alert the Soviets to how we got their number, and jeopardize U.S. national security. Which is to say, to blindside his Republican opponent Kennedy relied on that opponent's patriotism. ...

"The Republicans have allowed a communist dictatorship to flourish eight jet minutes from our borders!” Kennedy charged during the second debate. “We must support anti-Castro fighters. So far these freedom fighters have received no help from our government."...

Short weeks before the debates Allen Dulles (on Ike's orders) had also briefed Kennedy about Cuban invasion plans (what became the Bay of Pigs invasion). So the “Real Story” (as you well know Mr Ted Sorensen) is that Kennedy was again lying through his teeth. He knew [very] well the Republican administration was training Cuban freedom fighters. And since the plans were secret, he knew [very] well Nixon couldn't rebut. So Nixon bit his tongue again. He could easily have stomped Kennedy on it. But to some candidates national security trumps debating points.