Time For Another Beer Summit?

"Palestinian" isn't the same as "Muslim" -- almost, but not quite. About 50,000 people in the West Bank and Gaza, or 2% of the population, are Christian, and last weekend in the all-Christian West Bank town of Taybeh, a good number of them were hoisting one of the finest lagers in the world at the town's sixth annual Oktoberfest. Founded by the Khoury family in the heady early 1990s, when the Oslo accords seemed to presage a Palestinian renaissance, the Taybeh Brewing Co., which makes about 160,000 Pale-stein gallons a year using German and Polish hops, was the subject of a tasty LA Times article today.

You won't find Taybeh beer at Trader Joe's. Two strikes and it's out: It ships without preservatives and with a label reading "Made in Palestine." Israeli checkpoints make it hard (but not impossible) for the brewery to get its beer into Jerusalem. It's controversial on the home front as well, according to the Times:

Subtle Muslim-Christian tensions were apparent Saturday during the festival's opening ceremony. The mayor spoke of the need for a "moderate Palestine. 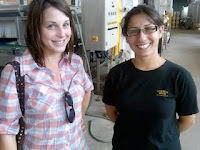 " Later, the regional governor, a Muslim woman wearing a head scarf, invited Oktoberfest attendees to enjoy the locally made products, such as olive oil and spices. But she couldn't bring herself to mention the beer.

If you visit the brewery, as I did during pilgrimages in 2007 and 2009, you get a tour and free samples. That's my elder daughter, Valerie (left), on last year's trip with Madees Khoury, daughter of one of the brewery's co-founders. The Khourys make a non-alcoholic beer (with a label in Hamas green) for abstemious Muslims. Maybe they should send a few cases to help loosen up the Israeli and Palestinian peace delegations. As for us St. John's pilgrims, keep some in the fridge for us, because, in January, Taybeh, here we come.
By Fr. John at 9:15 PM