Any Bells Tolling In Your Town? 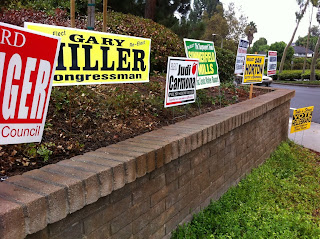 I pay a fair amount of attention to politics, but I usually have no idea what's going on in my home town except what I learn every two years from the campaign signs on street corners when I go for a walk or drive to work.

For instance, next month in Yorba Linda, there's something up for a vote called Measure Z, which, depending on the sign, is supposed to be about either ethics or local control. Another sign says that a City Council candidate who is seeking reelection is against this "ethics measure." Does that mean she's unethical? Coming to that conclusion requires, among other things, an assumption that Measure Z is really about ethics. Often enough, proponents and opponents of state and local ballot initiatives unethically claim that they're about something they're really not.

Yes, I do know how to figure it all out. I could pour over the materials that come in the mail from the Registrar of Voters and scour the local weekly for the occasional reference to municipal policy debates. I could watch City Council meetings on cable TV, and if there were a pressing issue that affected me or my family, I could dig even deeper.

Perhaps I should be ashamed to say this, but I really don't have the time. And there's shame in numbers. In many if not most smaller southern California communities, elections for city councils and especially school and water boards are dominated by those who habitually and sometimes obsessively take an ongoing interest or are motivated by passion or ambition related to single issues. In some local elections, no more than 20-30% of the jurisdiction's eligible voters will turn out.

If the group of those who are active is small enough, can it be construed as a special interest? Perhaps. It would be better if more people paid attention, but saying so and its coming to pass are wildly different things.

In many cases, such as in Yorba Linda, the electorate's disinterest is justifiably blissful, a consequence of the city being well run. On the other hand, there's the scandal in the nearby city of Bell, where elected and staff officials were allegedly looting the treasury with the broad impunity that can only be granted through a tacit agreement between oblivious voters and negligent journalists (though it was the LA Times, while looking pretty slim and haunted these days, that finally broke the story). The Bell rang as a warning for most of us in suburban southern California whose passion about municipal government usually extends no further than complaining when candidates don't collect their multicolored litter soon enough after election day.

* * *
Thanks to the local paper, some internet research, and more careful examination of the political signs sprouting up around town, I've learned that the so-called ethics initiative on Yorba Linda's Nov. 2 ballot is measure Y, which indeed proposes a revision of the city's ethics ordinance. Measure Z has to do with higher-density, or so-called work force, housing in a part of our city called Savi Ranch.

I've also learned from local columnist Jim Drummond that campaign signs aren't supposed to be posted within 15 feet of an intersection, which means that some of our candidates are technically scofflaws.
By Fr. John at 8:54 AM