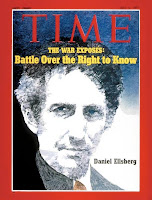 From Glenn Garvin at the Miami Herald (my mother's paper for a few months in 1965, during one of Detroit's periodic newspaper strikes, many of which were called by my genial journalistic Joe Hill of a godfather), a balanced take on Vietnam-era antagonists Richard Nixon and Daniel Ellsberg, subjects of a new public television documentary:

The fundamental problem with The Most Dangerous Man is that it's not really a documentary at all. Narrated by Ellsberg and based largely on his 2002 autobiography, it's more of an illustrated memoir. Though it includes interviews with reporters, Ellsberg colleagues and other figures in the case, virtually all of them treat him as an unalloyed hero.

The exceptions are Richard Nixon and a few henchmen who can be heard on White House tapes cursing Ellsberg and plotting vengeance. ``We've got to get this son of a bitch,'' snarls Nixon in one of the milder excerpts. They tried, filing criminal charges and even burglarizing the office of Ellsberg's psychiatrist in search of dirty laundry -- an act of over-enthusiasm that would help topple Nixon's presidency.

Nixon and his minions make easy (and, in many ways, appropriate) villains. But The Most Dangerous Man makes no attempt to put the government's side of the story in perspective. Ellsberg had just leaked 7,000 pages of classified documents and not just to reporters: A Russian double agent told the FBI a set had been delivered to the Soviet embassy in Washington.

Nobody knew what else Ellsberg had lifted from Pentagon files or what he might be planning to do with it. His ex-wife, though an anti-war activist, told the FBI she thought he was having a mental breakdown. Some of his accomplices were not merely anti war but pro communist, openly supporting North Vietnam's Stalinist government. If Nixon was paranoid about Ellsberg, he had good reason.

The Most Dangerous Man goes beyond omission to outright falsification in its implication that Nixon was trying to suppress the Pentagon Papers because they showed he was thinking of using nuclear weapons in Vietnam. In fact, the papers contained not a single word about his presidency; their account of the war ended in 1969, before Nixon took office. Nor was he escalating the war, as The Most Dangerous Man implies. When Ellsberg leaked the papers, Nixon had reduced the number of troops from the 536,000 deployed by Lyndon Johnson to 157,000.