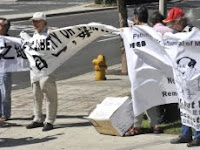 You need a degree in semiotics to figure out what Kai Chen's problem is with the images of Mao Zedong in the Nixon Library. Reporting about a demonstration by 12 people outside the Library today, the Orange County Register writes:

A needlepoint still-life, donated by the Chinese government, is in a nearby exhibit. Protest organizer...Chen of Los Angeles said he doesn't object to the other items, because they were presented by other people, whereas the statue was chosen by Nixon and seems to be an endorsement of Mao by the U.S. government – exactly what [Library director Tim] Neftali [sic] said he wants to avoid.

Let's be absolutely clear about this. The Chinese communist regime donated the framed needlepoint (showing President Nixon's 1972 meeting with Mao) in 1991, two years after the Tiananmen Square massacre. But that depiction of Mao is okay, whereas the statue is not because it was approved by the former President who formulated the opening to China considered by virtually every expert as a progressive hallmark of the Cold War (and who went back to China in the fall of 1989 to denounce the hardliners who ordered the Tiananmen tanks to roll). If I were Chen and his fellow protesters, who were actually wearing shirts commemorating Tiananmen Square, I'd be more offended by the gift from the butchers of Beijing.
By Fr. John at 10:16 PM

This article seems to imply that I don't know what I am doing, by pointing out that there are other items in the Nixon Library that are offensive as well. People miss the point: Mao with what he represents, violence and bloodshed to grab/maintain absolute power, is at the bottom of all evil by the communist regime in China. To say that to clean the source of contamination is the same to clean all dirty traces from that source is unwise (or stupid) to say the least. To rid off evil, Mao, with what he represents, must be eradicated first as the biggest source of contamination of human mind/soul. --- Kai Chen

The purpose of the World Leaders gallery at the Nixon Library, whose design and installation I oversaw as former President Nixon's aide and a former director of the Nixon Library, was to give museum visitors a dramatic impression of the personalities (good and bad) with whom Richard Nixon interacted on the world stage. The statues were designed to illustrate, not memorialize.

I understand that you find Mao offensive. I do, too. But he is part of history. Museum visitors are entitled to learn as much as they can about the leaders who shaped the world they live in.

In my opinion, you have not explained why a three-dimensional image of a leader is more offensive than a two-dimensional one -- hence my curiosity about why you aren't complaining about the needlepoint depiction of Mao that was a gift directly from the "evil...communist regime in China." It does memorialize Mao (specifically, his history-making meeting with RN in 1972), whereas the statute merely depicts him.