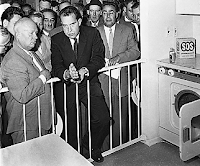 The sad news comes from Washington of the death of one of President Nixon's legendary triumvirate of first-string speechwriters, William Safire, at the age of 79. While a line between two points is too simple a metaphor for these unique talents, Safire tended to occupy the middle ground between Ray Price and Pat Buchanan. His Nixon affiliation ranged from 1959 (where he actually snapped the most famous picture of the so-called kitchen debate between Vice President Nixon and the Soviet premier, Nikita Khrushchev; note Leonid Brezhnev, who would unseat Khrushchev five years later, over RN's shoulder) until the early 2000s, when he played a behind-the-scenes role during some of the ups and downs in the Nixon extended family.

At least as famous for his punditry as his politics, he wrote op-ed and language columns for the New York Times for over 30 years. In his affectionate obit, veteran Timesman Robert D. McFadden demonstrated how Safire could combine the politically pugilistic and philological:

Mr. Safire called Hillary Clinton a “congenital liar” in print. Mrs. Clinton said she was offended only for her mother’s sake. But a White House aide said that Bill Clinton, “if he were not president, would have delivered a more forceful response on the bridge of Mr. Safire’s nose.”

Mr. Safire was delighted, especially with the proper use of the conditional.