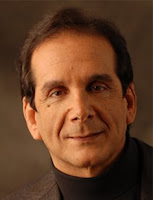 Charles Krauthammer says the French think we're appeasing Iran. Actually, I wonder if the distinguished columnist can actually prove that. Evidently President Nicolas Sarkozy (or his aides, who had to rewrite his speech, poor dears) wanted President Obama to reveal Iran's secret nuclear facility last week during the UN Security Council meeting instead of a day later at the G-20 summit. The news from Qom was so dramatic, the weakening impact on Iran's position so immediately discernible, that it doesn't matter where Obama sprang it. But it appears Krauthammer also would have preferred the grandeur of the once-hated UN to the prosaism of Pittsburgh.

What a difference a year makes. To employ a favorite device of U.S. conservatives, the right would've given George W. Bush high fives and hallelujahs for irritating the French and choosing a city in Gov. Palin's "real America" for his dramatic announcement. Le difference is that Krauthammer thinks Obama's wasting time on Iran with weak diplomatic posturing. While I agree that Iran's bomb is probably our greatest national security challenge, it's too early to pronounce the Obama policy a failure. For instance, Krauthammer's column fails to take into account positive developments at this week's Geneva meeting.

I suppose if you think that Obama is hopelessly incompetent or feckless, that he would never be willing to take the ultimate steps that may someday be necessary to keep a madman from having a doomsday weapon, then you want to underrate and even undermine everything he does. I'm just not that pessimistic. I also believe that irrespective of the eventual outcome of the Iraq war, history will judge Bush harshly for failing to push harder on sanctions before going to war. So with Iran, every possible diplomatic expedient must be used short of the use of military power, including delaying tactics in the hope of regime change in Tehran.

Nobody should be eager to go to war against Iran (or anyone). So everyone should be hoping the Obama policy succeeds. By the same token, it makes no sense to pretend it's working when it isn't. But the French president's speechwriter's having to crank out a new draft and a questionable location choice for a press conference don't rise to the level of five-alarm crisis.
By Fr. John at 7:45 AM