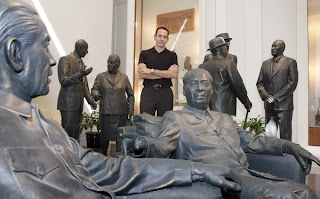 An LA real estate investor has single-handedly made a federal case out of the presence of a statue of Mao Zedong at the Nixon Library. Previously confined to Kai Chen's website, the issue rose to the attention of the LA Times today:

"Mao was the biggest mass murderer in human history," Chen said, his volume set to high. "His hands were dipped in the blood of American soldiers who fought in Korea and Vietnam. How can that image be put alongside world leaders like Winston Churchill and De Gaulle? It's a perversion of American freedom. You don't put an anti-American symbol in a U.S. museum."

While generally sympathetic to the criticism, the Library's federal director, Cold War scholar Tim Naftali (shown here), doesn't promise to remove the statue anytime soon nor indeed those of Nikita Khrushchev or Leonid Brezhnev, neither of whom was a day at the beach. Naftali does say:

"I think having a statue of a person in a museum can imply respect," he said. "I thought there might very well be confusion among visitors. With Churchill, Meir and Sadat all in the same room, there is an equivalency there and the implication that they're all alike. They were not all alike. Mao was a mass murderer.

"It seemed to me out of place in a publicly funded museum," Naftali added. "I don't think it's the best way to teach history."

Why that's true, I'm not precisely sure. As I wrote in August on learning of Kai Chen's campaign:

As the Nixon aide (later, private Nixon Library director) who supervised the design of the display in which the statues appear, I can say with absolute confidence that they weren't intended to honor anyone. We asked President Nixon to pick the ten leaders he'd met who'd had the most decisive impact on the postwar world. Four of his choices were leaders of communist regimes -- the two Chinese plus Soviet leaders Leonid Brezhnev and Nikita Khrushchev. The idea was to give visitors an idea of what they looked like and illustrate RN's proposition that the U.S. could be a force for stability and constructive change by finding ways to be in dialog even with leaders of unfriendly or unsavory powers.

Nixon would have been the first to say that the Chinese regime was odious....And yet there's considerable evidence that his overtures and policies were good for the Chinese and Soviet peoples, in the same way that the North Koreans and Iranians might end up being better off if relations with the U.S. improved.

No one from the private Nixon Foundation was quoted in the Times article, though two of the Library's docents spoke up on behalf of the volunteers' nearly two decades of service as expert and unfailingly professional interpreters of President Nixon's life and times.

Overall the article seemed designed to leave the impression that sticking up for keeping Mao's statue would amount to a vote for the formerly private Nixon Library's pro-Nixon spin. Memo to the younger generation of reporters: Richard Nixon was an anti-communist. His counter-intuitive opening to Beijing was the essence of his genius as a statesman. I doubt if Naftali or indeed Kai Chen would argue that the Chinese people, no matter how they were abused by their communist leaders, would be better off if Richard Nixon hadn't sat down with Mao and tipped mao tai glasses with Zhou. If the policy was worth pursuing then, it makes abundant sense to depict the Chinese leaders now in a museum gallery designed both to capture a unique moment in the annals of geopolitics and to demonstrate the advisability of being willing to shake hands with friends and foes alike in the pursuit of peace.
By Fr. John at 6:43 PM

The former director of Nixon Presidential Library/Museum wrote this article to lessen the damages and appease the outrage caused by the display of Mao statue in the "World Leaders" section in Nixon Library only further demonstrates the moral confusion (if not moral corruption) of Nixon himself and those around him. To give credit to Mao as someone who had the best interest of the Chinese/world people in his heart is the most outrageous claim that distorts not only facts but historical truth. The past Mao policy toward America was the same of the policies toward America by the current Chinese communist regime today -- a "Soft Cold War" to corrupt American government officials/civilian leaders while attack the core of America's founding principles and values, in order to postpone its inevitable demise. To see the current China's mode of development as a viable and legitimate road to better life/future, to see the Chinese regime's inability to control (not its intention) as some kind communist genius, to model America after the Chinese "Bureaucratic Mercantilism" in its most vicious form is an insult and attack on the conscience of freedom-loving people in China and in the world. --- Kai Chen

Thanks for your comment. Your having stated your opposition to the opening of constructive relations between the United States and China -- while going against the preponderance of opinion in both countries and indeed around the world -- does make your position on the Nixon Library statue easier to understand.