Why So Angry About Mary? 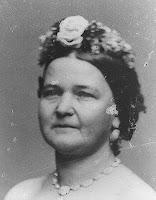 A century and a half, and still no consensus about poor Mary Todd Lincoln. In his review of the latest batch of Lincoln books, Civil War scholar James McPherson compares an angry- and cruel-sounding depiction of the tragedy-haunted First Lady in Michael Burlingame's two-volume Abraham Lincoln biography with a more discerning portrait by the author of Mrs. Lincoln: A Life:

[Burlingame's] narrative is...marred by a relentless hostility to Mary Lincoln, who had, he writes, "many symptoms associated with narcissism and with borderline personality disorder," including manic depression. She made Lincoln's domestic life "a burning, scorching hell" as "terrible as death and as gloomy as the grave." Burlingame goes on for page after page like this, quoting almost every negative portrayal of Mary Lincoln he found and almost nothing from the numerous sympathetic appraisals that other historians and biographers have cited....

For a balanced profile of Mary Lincoln one should turn to a new biography of her by Catherine Clinton, where we encounter a sensitive treatment of a woman who (like Abraham Lincoln) endured the death of her mother when she was a child and watched helplessly the deaths of three of her four sons in childhood and youth—not to mention the assassination of her husband by her side. It was little wonder that she sometimes seemed to go off the rails. But she had many positive traits as well. Mary's "unconditional love sustained Lincoln's growth to greatness," writes Clinton[:]

She was a woman of intense intellect and passion who stepped outside the boundaries her times prescribed, and suffered for it. She was someone who endured more personal loss and public humiliation than any other woman of her generation.

McPherson also highlights Lincoln's wonderful description of the straining toward perfection that characterizes the American political project at its best:

[The founders] meant to set up a standard maxim for free society, which should be...constantly looked to, constantly labored for, and even though never perfectly attained, constantly approximated, and thereby constantly spreading and deepening its influence, and augmenting the happiness and value of life to all people of all colors everywhere.