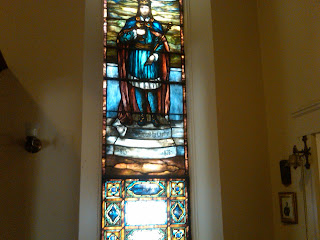 At St. Edward the Martyr on E. 109th, Kathy and I were graciously welcomed for a look around by Cecilia, the church secretary. The 126-year-old parish (preparing for a visit by Bishop Sisk this Sunday) serves a diverse English- and Spanish-speaking congregation. For seven years beginning in 2001, the rector was a friend from the Diocese of Los Angeles, the Rev. Adam McCoy of the Order of the Holy Cross. Oddly and reassuringly, my first home in New York City (for three weeks in September 1980) was on the same street but on the west side, off Broadway. That's St. Edward above. If I'd had my head on straight, I'd have gotten a photo of Cecilia.
Sent from my Verizon Wireless BlackBerry
By Fr. John at 11:59 AM