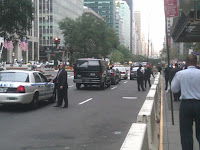 I've been inside the security bubble of a sitting President twice, including when the Nixon Foundation invited President Clinton to speak at a foreign policy conference we convened in 1995 at the Mayflower Hotel in Washington, D.C. I had the privilege of greeting him on arrival and escorting him through a cocktail reception. In his interactions with our guests, his exceptional charm was much on display. As for the security, it was as though the air hummed. For a half hour before his motorcade arrived at a side door, several dozen penetrating eyes in carefully composed faces followed me as I freely if 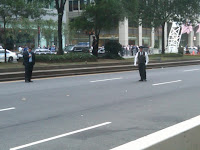 self-consciously roamed the secured portion of the hotel's first floor. Maybe it's what power feels like, or just all those walkie-talkies buzzing at once. Whatever it is, it's invigorating.

So as Kathy and I explored Manhattan this morning at the beginning of a three-day vacation, it was hard to stay away from the Waldorf Astoria on Park Ave. between 50th and 49th Sts., where President Obama is staying during the opening week of the UN General Assembly. We knew he had addressed the GA at 10 a.m. Around noon, as we walked sout 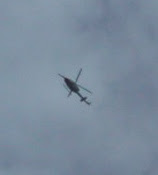 h on Park, we noticed there was no traffic on the northbound side. A plainclothes officer or agent and a doorman were standing in the middle of the street. Police officers stopped letting people cross either Park or 49th St., though they didn't interfere with those standing near the the main entrance. There was that buzzing, hyper-alert feeling again, enhanced by the sight and sound of a chopper circling overhead (we may assume it wasn't Channel 4). While we hoped we might see the President arrive, we assumed it was more likely he'd use 49th or even the Lexington Ave. entrance to the Waldorf Towers (where RN used to visit Herbert Hoover and Gen. Douglas and Jean MacArthur). Sure enough, at about 12:15, the officers 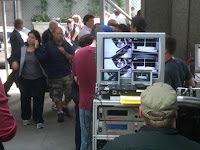 received a signal, lifted the barricades, and disappeared. No POTUS for us. We have no idea how he got back into the building, which, as a matter of fact, is just as it should be.

Anyway, this is New York, so some new excitement is usually just around the next corner, or in our case, about ten blocks south on Park, where we ran across a movie shoot. It was between takes. I took a picture of a familiar-looking actor leaning against a car. Security was conspicuous here, too, and indeed all over this still-wounded town. A gracious young location assistant invited us to move along quietly, so we couldn't gawk at the actor long enough to figure him out. My Facebook friend Mark Wills says it's Mark Wahlberg, and I think he's right. He started shooting an Adam McKay movie today with Will Farrell. And hey, Wahlberg was in a movie about a President. Close enough. 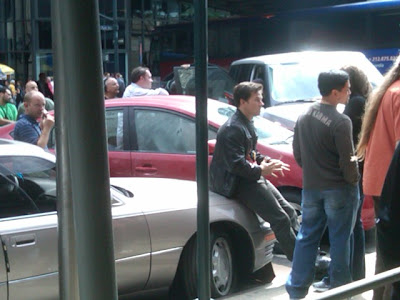