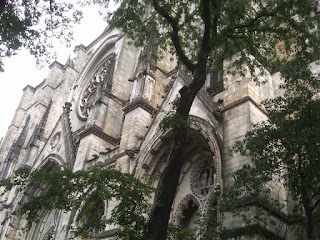 For Episcopalians visiting New York City, all roads, streets, and avenues lead to the Cathedral of St. John the Divine, the world’s largest Gothic cathedral and the seat of the Bishop of New York, the Rt. Rev. Mark S. Sisk. It reopened last November after a devastating fire in Dece 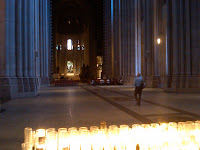 mber 2001. I first saw it nearly 30 year ago and remember it looking gloomy and in desperate need of a good sandblasting. Kathy said the same thing yesterday when we visited St. Patrick’s. Now the massive pillars in the St. John’s nave are clean and bathed in pale blue light; the eye follows them to the distant arched ceiling and beyond. I remember pews, but they’re go 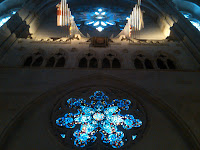 ne now. Bas-reliefs in the floor depicting the signal places of Jesus’s life and ministry – Bethlehem, Nazareth, Cana, Bethany -- guide the visitor toward the altar, associating this grandest of structures with the far more modest-seeming but epochal places we St. John (Chrysostom) pilgrims visited during our pilgrimage in August.

“It’s Episcopal?” one stunned visitor asked a docent. “It’s not Catholic?” Only 2.5 million of us, but the most stunning cathedrals in New York and Washington. So there. This one’s famously unfinished, especially the spires that front Amsterdam Ave., which stonemasons are building the Middle Aged-fashioned way, brick by brick. Plus the gift 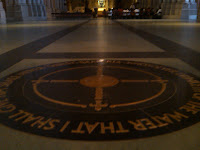 shop, in which the fire started, has not reopened, and the volunteer in the narthex wasn’t sure it ever would. So where does a guy get a Book of Common Prayer in this town?

During our visit, someone was tuning the really high notes on the organ, which added to the ethereal impression of a building whose highest reaches have been newly thrown open to upwardly cast eyes. Outside, in the children’s garden between the cathedral and diocesan offices, there was…well, the kind of bird you don’t normally see in Manhattan. From the look on his face, I don’t think he recognized me, either.

Brian St. John (that name again), of Orange County, California, tells me it's a peacock -- or, as Flannery O'Connor called them, peahens. But I thought they had colored feathers? Oops: Over on Facebook (where there is considerably more attention being paid to this question) Nancy Larkin confirms it's a white peacock. Thanks, friends! 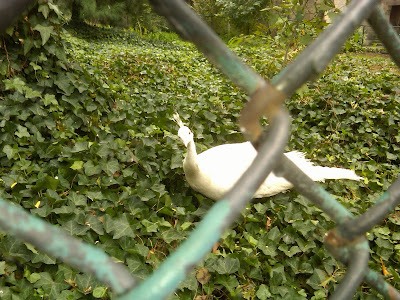