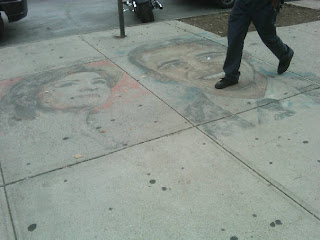 President Obama was smiling today on this sidewalk on Broadway around 110th and yesterday at the UN -- and with good reason. He persuaded the Russian President to suggest that Moscow would be open to punishing Iran for failing to cooperate with international efforts to deter it from developing nuclear weapons.

The New York Times speculates that we got the Russians on board by scraping the current U.S. policy on our so-called missile shield over the former Warsaw Pact countries. If that's true, according to a friend who's an expert on arms control and SDI, then Obama's breakthrough came in exchange for virtually nothing, because the shield has been a chimera (although, in fairness, evidently never to the Russians) ever since President Reagan became infatuated with the idea in the 1980s. Reports the Times on this ten-strike win for Obama's foreign policy:

With a beaming Mr. Obama standing next to him, [Russian President Dmitri] Medvedev signaled for the first time that Russia would be amenable to longstanding American requests to toughen sanctions against Iran significantly if, as expected, nuclear talks scheduled for next month failed to make progress.

“I told His Excellency Mr. President that we believe we need to help Iran to take a right decision,” Mr. Medvedev said, adding that “sanctions rarely lead to productive results, but in some cases, sanctions are inevitable.”

White House officials could barely hide their glee. “I couldn’t have said it any better myself,” a delighted Michael McFaul, Mr. Obama’s senior adviser for democracy and Russia, told reporters after the meeting. He insisted nonetheless that the administration had not tried to buy Russia’s cooperation with its decision to scrap the missile shield in Europe in favor of a reconfigured system.