Farewell, Mark! (When Can You Come Preach?) 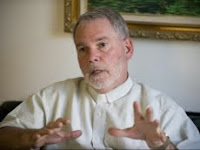 My mentor, sponsoring priest, and beloved friend, the Rev. Canon Mark Shier -- Vietnam veteran, brilliant theologian, and loyal Bruin -- is retiring this weekend after nearly 35 years as rector of the the Episcopal Church of St. Andrew the Apostle in Fullerton, California. The Orange County Register takes due note:

[Fr. Mark] said he appreciated the religion's unconditional acceptance of humanity including the Episcopalian views on women as priests, gays and lesbians and immigration.

"We don't demand everyone agree with us 100 percent; we are saying to pray for and love one another," he said.

Shier can't forget when his older, gay brother was dying of AIDS. He told his congregation he was bringing him to Fullerton and would care for him no matter what.

"I said if anyone had a problem with that, to come and talk with me," Shier said. "No one came. Instead, many people asked how they could help."