The Gospel According To Boaz 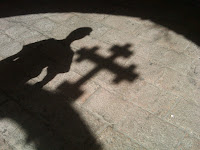 Political scientist Cynthia Boaz has always told friends that the U.S. shouldn't consider itself a Christian nation but rather one based on secular, Enlightenment values. But when she applied New Testament teachings to domestic and foreign policy issues, she liked what she discovered.

I don't agree with much of her analysis, especially the canard that the NT proves that Jesus and his followers were socialists. As for foreign policy, imagine a President saying after a brazen attack such as Pearl Harbor or Sept. 11 that we are called to love and forgive our enemy and turn the other cheek, namely Los Angeles or Seattle.

It's important to remember that Jesus's earthly ministry was personal, one-on-one, incarnational. He was most concerned about individual, not corporate, behavior. When tempted with the prospect of wielding earthly, political power, he pointedly declined. He didn't quite say so, but one can easily imagine him believing that if he could persuade people to behave justly and peaceably toward one another in close quarters, then justice and peace would thrive everywhere.

Still, Boaz's essay should be provocative for all Scripture followers, if only as a reminder of how Christian principles can influence and infuse our relationships with those to whom we are closest. Her conclusion:

[H]onest Christians are hard-pressed to deny that the example offered by Jesus' life tells us that if our own spiritual evolution (and frankly, salvation) is a consideration, we have no choice but to not only hold the needs of others in equal stead with our own, but must find ways to share what (oftentimes little) we have in order to fulfill that calling.

So if we concede that the United States is a "Christian nation," it follows that its citizens, as practitioners of the teachings of Jesus, should be: anti-war, anti-gun, anti-death penalty, pro-universal health care, pro-taxes and pro-(democratic) socialism, while also being - to the rest of the world - forgiving, meek, humble, generous and loving of everyone, even perceived enemies.

Her essay is nice, but not all that radical. Your comments on it, however, are intriguing.

"imagine a President saying after a brazen attack such as Pearl Harbor or Sept. 11 that we are called to love and forgive our enemy and turn the other cheek..."

You seem to be saying that if X results in a president being drummed out of office, it must be bad. Surely both Socrates and Jesus can teach us that the crowd is often immoral, and appeasing them is hardly good behavior. I think the conclusion is actually that being a popular president is probably inconsistent with following Christian values. Just as good Christians don't accept the job of drug smuggler, so also good Christians should not accept the job of president, because the job description involves doing things no good Christian should do.

The conclusion is that Jesus, of course, was no socialist any more than he was a capitalist. And his followers would do well to follow his example.

"imagine a President saying after a brazen attack such as Pearl Harbor or Sept. 11 that we are called to love and forgive our enemy and turn the other cheek, namely Los Angeles or Seattle..."

Yeah, imagine! You write as if Christian values, properly adhered to, would result in safety for Los Angeles and Seattle, so whatever puts them at risk must not be Christian values. Perhaps Christian values call us to sacrifice and radical risk, even the risk of our own lives?

"He didn't quite say so, but one can easily imagine him believing that if he could persuade people to behave justly and peaceably toward one another in close quarters, then justice and peace would thrive everywhere."

But suppose he did: wouldn't this seem to be true? A president may think that when he orders the killing of thousands, it's not "close quarters", but it is, at least for the soldiers who carry out his commands. Those who were tortured in the previous administration, were tortured in "close quarters", were they not? And some of the torturers believe themselves to be good Christians too!

But what of the fact that Jesus did not, in fact, say what you note he didn't quite say? It's because Jesus' focus, always on the individual, does not pretend to aim at what would make justice and peace thrive everywhere. We humans--Enlightenment nonsense notwithstanding--are not omnipotent and are not masters of our own fates. Jesus didn't say "this will fix all human problems", because he was resolutely against the arrogant assumption that I (or we) can all just band together and fix our problems.

Jesus' ethics are real, and hard, and don't let us off the hook with facile distinctions between "personal" and "corporate" behavior. Indeed, there is no such thing as corporate behavior. Attempts to define and create that corporate sphere, are unmasked as attempts to avoid personal responsibility for what are, always, the acts of personal, individual human beings.

That's pretty much what I was driving at, Thomas, though you said it directly and much more eloquently. I think a President can be selectively, perhaps even deviously prophetic, but if he or she spends too much capital tilting at windmills, they (excuse my departing from scrupulously correct pronoun protocol) lose, first, their leverage and, second, their office.

Hence Obama's conception of himself, at least at one point, as a radical incrementalist or incremental radical, one of the two. Carter's the best modern example of a President who failed to strike the right balance and ended up letting his inner Bible study teacher wag the White House (though I believe his faith was an essential component of his magnificent success at Camp David).

Of course there are certain moments when the President's absolutely got to toe the us-vs.-them line -- moments of immediate national peril (don't even think about running for commander-in-chief if you're not willing to do what the job demands) and even moments such as the one in which Obama now finds himself, when he may have to fire the guy who signed the weird Sept. 11 petition.

Thomas: My comment, above, was in response to your first comment, way above. Will chew on your second.

NB: I had a Facebook exchange with Dr. Boaz. She wrote:

Thank you for the thoughtful feedback. I think the distinction between Christ's ministry as personal versus collective/corporate is instructive. I may not have made it clear enough that I was making suggestions/observations about individual behavior, not prescriptions for institutional change. ♥

Dr. Boaz: Thank you for your comment and article. The difficulty is when the powerful person's voluntarily exercise of Christian (or any kind of) ethics results in the coercion of others, through taxes, military service, laws, whatever. A person may prophetically call and inspire others to voluntary acts of righteousness, justice, and peace, though in a biblical context, at least, an inherent aspect of prophecy, which is almost always countercultural, is some personal risk and sacrifice. So Dr. King was a prophet, Sen. Kennedy a liberal senator! All this gets somewhat far afield from your fine article, for which I say thanks again.

At moments of national peril, does Christianity go out the window?

Is this not precisely the question which faced Isaiah?

Is Christianity only good for the times it won't cost us too much?

Giving someone a title and a list of job responsibilities does not somehow make their bad actions into good ones; and certainly not if they chose the job for themselves, shamefully begging the mob for it!

At moments of national peril, the national soul is on the line. So far, our presidents have nearly *all* signed away the national soul to Mephistopheles at those moments, since that's what the devil required as the price of all the wonderful things the devil can offer.

You may be right. As for me, I have enough doubt that I don't think I would be able to let LA go and be certain our Lord would agree.

I like the question, "What would Jesus have done after Pearl Harbor?"

There is no convincing answer. We don't know what his response would have been.

What we are looking at is a problem common to all creeds, which is that, because of the staggering complexity of the world, creeds fail us in certain situations.