And The Cop Says, "I Suspect The Thurifer"

The Rev. Canon Michael Bamberger, LA's firefighting priest, rector of the Church of the Ascension in Sierra Madre, reports from somewhere behind the lines of the still-treacherous Station fire:

I realize it’s been a few days since the last update… sorry but I’ve been a little busy and somewhat out of touch. The real fire chief got back on Monday and contrary to expectations – the fire didn’t go out. In fact, as of tonight it is about 155,000 acres and at 44% containment – the biggest fire in Los Angeles County in recorded history. Every major watershed in the Los Angeles basin has been burned out. The most visited National Forest available to an urban population in the United States will be unavailable for who knows how long, Two firefighters have died and dozens have been injured. Civilian injuries have been limited, thankfully, and most were due to people refusing to evacuate as advised. 64 homes and several businesses have been lost. It will take years for us to calculate the losses, and centuries for the forest to recover.

And we’re not out of the woods yet. There is still an awful lot of open “line” and some of the most critical is right above Sierra Madre. The next few days will be critical. We need favorable winds, lower temperatures and higher humidities. And a lot of hard work by the ground-pounder firefighters, dozers and aircraft.

My job on the fire for the last few days has been Agency Representative for the City of Sierra Madre. (I’m a long way from the fire lines – my personal biggest risk is paper-cuts.) What I do is go back and forth between the city and the Incident Command Post in Lake View Terrace and I go to planning meetings, briefings, and spend time with field supervisors. I had a fun time today with some guys from an incident management team from Alabama who have come to watch how we do this in California. I also stand around bored some of the time. 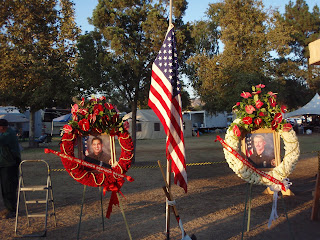 Today was quite emotional as there was a memorial service at the fire camp before the 6a.m. briefing for the two fallen firefighters. Later, there was a procession for one of the men from the mortuary in North Hollywood past the command post and fire camp out to his home in Victorville. Hundreds of firefighters and law enforcement people, and even some civilians who figured out what was happening, lined the freeway all along the way.

I am going to get coverage from “SMD AREP” duty on Sunday and do my “regular” job on Sunday. I’m really looking forward to some normalcy. At the Command Post, a few days ago I ran into another priest with a similar interesting side gig – he’s a reserve deputy sheriff. We compared sermon notes and realized how odd this might be to some people. Some folks took our picture together. I can’t wait to send it on with the beginnings of a joke – “Two Episcopal priests walk into a Fire Command Post – one is dressed like a fire chief and one is dressed like a cop, and-- “ The contest is to come up with the funniest punch-line.

All shall be well – God is good.