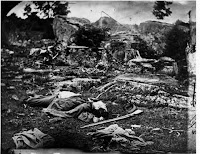 Historian John Summers, a visiting scholar at Boston College, was surprised when he went home to Gettysburg, Pennsylvania over Christmas, took a walk with his wife, and saw that the trees lining his beloved Seminary Ridge had been chopped down. Those in charge of the battlefield decided they wanted it to look as it did at the time of the battle, even though the trees, shrubs, flowers, and grass that have grown there since July 1863 were watered with the sacred blood of the dead and wounded. Summers' reflections reminded me of my wife's and my walk through the Santa Ana River basin last weekend and our witnessing of God's astonishing regenerative power in the wake of November's devastating fire.

And yet how impatient we can be for restoration on our timetables instead of God's -- just like Moses' people, wandering in the wilderness and wondering what God and his prophet had done for them lately. Sometimes we may even wonder whether we can trust Jesus's promise in John 3:16 to destroy death's power over us. We're impatient because we want to win, we're afraid principles we hold dear aren't being respected, or we don't want those we love to suffer. In a way, we're all little Gettysburgs, displaying the scars of battle as well as evidence of God's restorative grace. As St. Paul wrote to his friends in Ephesus, "We are what God has made of us." For my Sunday sermon, go here.
By Fr. John at 7:10 PM