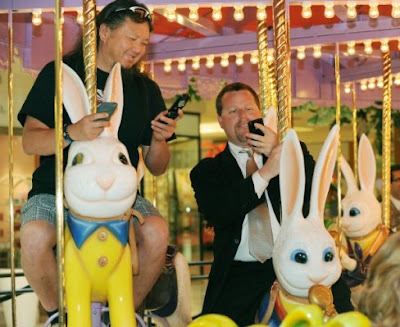 Perhaps you're wondering why.

See, you never know what Noah will get up to -- such as, for instance, floating around at 30,000 feet with legendary astrophysicist Stephen Hawking in Zero Gravity Corp.'s specially rigged 727. This time, Noah and Wing Lam, owner of Wahoo's Fish Taco, were assisting their fellow supporters of the Orange County Register's "Season of Caring Presents the Possible Dream," a collaboration between our hometown paper

and world-famous shopping center (all presided over by the energetic Sandra Segerstrom Daniels) to raise $270,000 for ten local children's charities. I'm proud to be one of the judges as well as a board member of Register Charities.

After a campaign over the holidays had raised 70% of our goal, Noah and his colleagues had the bright idea of putting 17 county leaders on SCP's famed carousel with their cell phones and riding (and riding, and riding) until each had raised $4,000 from friends, colleagues, and anyone else who felt sorry for them.

At a ceremony this afternoon at the Santa Ana offices of my valiant friends at the Register (who are battling to save democracy by saving the newspaper business), I forgot to ask Noah what was worse: Floating upside down for 30 seconds in Zero Gravity's vomit comet, or spending two and a half hours on a giant bunny rabbit while trying to dial numbers on BlackBerry keys the size of Chicklettes.

Either way, Noah and Co., you brought big dreams to life for some of those hit hardest by the economy -- even if you were just going around in circles.
By Fr. John at 5:30 PM