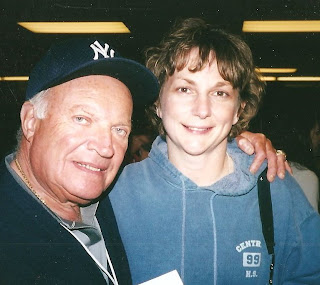 My wife, Kathy, President Nixon's last chief of staff, has all the Arthur Richman stories. The former baseball columnist and legendary Mets and Yankees executive -- the genius who suggested to George Steinbrenner that he hire Joe Torre as manager -- died today in his sleep at the age of 83.

That's Arthur with Kathy at Angels Stadium a few years ago during one of his periodic trips west with the Yankees. He'd always say, "Honey, do you need any money?" She may (or may not) have been surprised to learn today that it wasn't just she. Jack Curry writes in the New York Times:


A few years ago, after Richman once again asked me if I needed any money, I decided to teasingly test him. I asked him what he would do if I took him up on his offer and said that I needed a few bucks.
“I’d ask you how much you wanted and I’d give it to you,” Richman said. “How much do you need?”

Kathy never took his money, either. But once she took me to dinner with Mr. Richman at Mr. Stox in Anaheim. It's a big guy place -- Sansabelt slacks, loafers, blue blazers, martinis, back-slapping, loud stories, big hugs. Tim Mead, longtime Angels VP for communications, was there, along with some of his colleagues from the team. Arthur held court and picked up the major league tab. He talked respectfully about Steinbrenner and told us about going on the road with troubled Yankee right fielder Darryl Strawberry to help him stay focused on his play. He passed his World Series ring around the table. When we left, he told Kathy he loved her.
By Fr. John at 9:41 PM