Knock-Knock. Who's There? Gnatcatcher. Gnatcatcher Who? Gnat Let Me Catch You Hanging Out With Cowbirds! 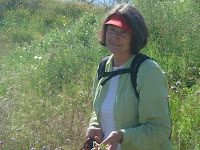 Margot Griswold spends many of her days pricking up her ears for the grateful song of the California gnatcatcher. Pairs of the four-inch-long bird, listed as an endangered species, were displaced, it is thought, by the construction of State Route 241 in Orange County, California, hereinafter known as the toll road, my daily drive between home and St. J 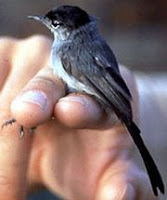 ohn's Episcopal Church. Dr. Griswold's sun-drenched 200-acre laboratory is called a mitigation and restoration area. Half used to be a citrus orchard, while the rest is coastal sage scrub, the birds' natural habitat. As a plant ecologist under contract since 1998 to the public agency responsible for the toll road, Dr. Griswold and her team have been transforming the whole area into a sage scrub wonderland for contented gnatcatchers.

This morning she took about 25 people (most of us being toll road users who usually whiz by sipping coffee and listening to the radio) on a three-mile walk up and down the site's gently rolling hills. In the wake of 2007's devastating Santiago Fire, it's also a burn recovery area. The gracious scientist never would've said that she welcomed the fire. But without people around, the area would burn every 50 or 100 years anyway thanks to lightning and other natural causes, and she's been intrigued to see how nature's and her own restorative efforts interact.

Her main tool is what she calls a deep seed mix -- "lots of species, interacting with one another, everyone benefi 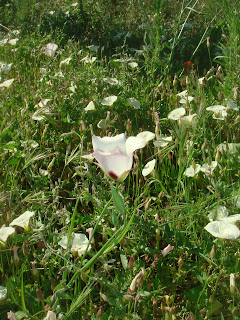 cial to everyone else," she said. "You want the plants to grow together, like a net -- a physical net, not a philosophical net." She smiled and added, "Some people say it's a fantasy net. Some people say seeds are unreliable. Don't tell the plants! They've been doing it a long time. The pace of natural processes are lost on some of us. It takes time to grow, just like it takes time for some of us to grow up."

Creating a self-sustaining habitat is different from planting a garden, she said; "if you plant a garden and walk away, after a while, it's gone." Even as she conducted our tour, she had a eagle eye for species that were the most conducive to happy gnatcatchers. Springtime's yellow flowers all looked great to Kathy and me, but the mustard weed was unhelpful, especially if it grows too tall, while the daisy-like encelia was good. Fire-following white morning glories were everywhere, but Margot had an eye for the somewhat more elaborate white blossoms of the Catalina mariposa lily. Delighted, she pointed to a cholla cactus that had survived the fire by growing in a grassy field instead of in scrub. Her brow darkened as she wrenched a weed called Devil's claw from our path. She said she and her team would be back for its cousins.

Theological language came up once more, and somewhat more disturbingly. We walked past three enclosures designed to trap parasitic cowbirds, which lay their eggs in the gnatcatchers' and meadowlarks' nests. "It's like dumping your kids and taking off," Margot said. 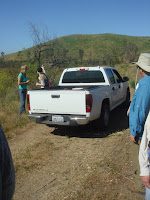 The songbirds end up looking after the larger cowbird eggs instead of their own.

This aspect of the massive and no doubt worthy effort to save gnatcatchers is a little bloodcurdling. The cowbirds are lured into the traps by so-called Judas birds. During our tour, two young men drove by in a white pickup truck. Their job: Release "non-target birds" such as swallows from the trap and then remove the cowbirds. When someone asked Margot what happens to them, she looked uncomfortable and drew her finger across her throat. She stressed that her portfolio is related to parasitic plants, not parasitic birds. Nonetheless thousands of cowbirds are giving their lives each year for the sake of the gentle gnatcatcher. Mitigation and restoration ain't for sissies. 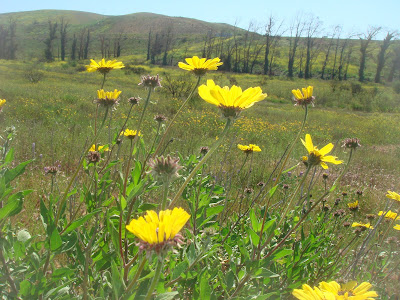 Thanks for passing this along. Great narrative and great pictures. FYI, we replaced about 8 acres for every acre impacted by the project.

Thanks, Greg. It's a beautiful spot and a great gift to Orange County.