Glad He Was Mad 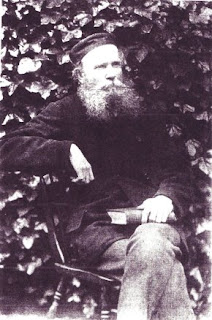 In The Professor and the Madman, Simon Winchester tells the story of W. C. Minor (left), a military physician who seems to have been severely traumatized by the Battle of the Wilderness during the Civil War and was sent to an English mental institution after killing a man in London after the war -- only to become a principal contributor to the mammoth Oxford English Dictionary. James Murray, its editor, built a network of volunteer readers by distributing fliers via booksellers. One of these found its way to Dr. Minor, who became a vital cog in Murray's apparatus long before the editor realized that his most brilliant and dependable volunteer was confined to the Broadmoor Asylum for the Criminally Insane.

Winchester speculates that Minor suffered from schizophrenia, which, today, would be substantially relieved by drugs and other therapies. Since like many troubled geniuses, Minor was obsessive about his creative work, we're left to wonder about the extent to which the advance of civilization -- not just the creation of great dictionaries -- depends on untreated or rampant pathologies:

One must feel a sense of strange gratitude, then, that [Minor's] treatment was never good enough to divert him from his work. The agonies that he must have suffered in those terrible asylum nights have granted us all a benefit for all time. He was mad, and for that, we have reason to be glad. A truly savage irony, on which it is discomfiting to dwell.