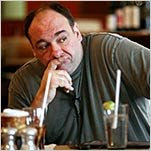 "Sopranos" trivia from the New York Times, reviewing a new play, "God of Carnage," in which Marcia Gay Harden, playing opposite James Gandolfini, explains why she didn't get a job on HBO's mob series:

Long ago, she said, she auditioned for the part of Tony Soprano’s sister, Janice, which ended up going to Aida Turturro; Mr. Gandolfini himself disqualified her in a way that she said she found sweet and to the point.

“He took one look at me and said: ‘No, no, this isn’t going to work. She can’t play my sister because I’d want to sleep with her,’ ” Ms. Harden recounted in a phone interview, adding, “But he didn’t use quite those words.”