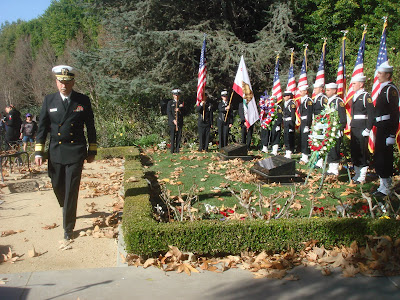 On a windy afternoon in Yorba Linda, Rear Admiral Garland Wright placed a wreath at the grave site of the 37th President, part of a daylong celebration of what would've been his 96th birthday.

The Florida-born admiral is a sailor in more ways than one. An all-American athlete, he was co-captain of Annapolis's first-ever national championship sailing team. In their remarks to a crowd of 150, he and Commander Sheri L. Snively, chaplain of Miramar MCAS in San Diego, talked about RN's own naval service. Snively -- a Quaker minister and distant Nixon cousin -- stressed the significance of the future President going to his peaceloving Quaker mother Hannah and asking permission to seek his naval commission at the beginning of World War II.

After the wreath laying, I gave a talk about President Nixon in the White House East Room -- after being introduced by the great Bruce Herschensohn. It should've been the other around! Read an account of the day at the Library here.
By Fr. John at 10:07 PM

Amazing Mr. Taylor, I put up a RN quote on the top of my blog yesterday...

Did you see that gratuitous Illinois state house member assail Blagojevich by saying the Nixon was his hero???

They don't even respect the dead to score a cheap political point which in my estimation has no relevance....

Thank you for keeping the spirt of our beloved 37th President alive and well out there in Yorba Linda.