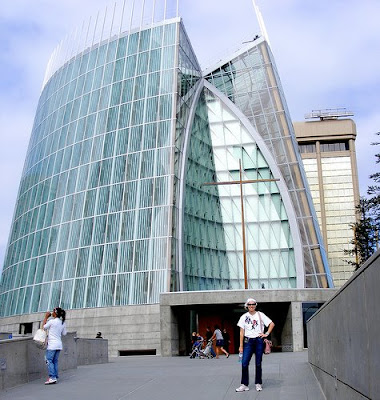 A half-hour ago, a friend sent me this photograph of the brand new Roman Catholic Cathedral of Christ the Light in Oakland, California, a good image to behold this morning of the Feast of the Epiphany. Christmas ended last night. Today the church celebrates the enlightenment of the world as signified by the visit paid to the Holy Family by the Magi (the gospels actually don't say there were three of them).

In an hour or two, I'll have the blessing of preaching at St. John's School about three epiphanies -- the one in the Bible, the ones we experience when we least expect them (those aha! moments of revelation, belonging, and peace), and the ones we can actually engineer by counting our blessings instead of our grumps. I also just finished writing the "Prayers of the People" for our Epiphany season liturgy at St. John's Church, which will take us right up to Lent (which is closer than you think!). We'll be asking for Epiphany light to suffuse all the shadowed corners of our lives and world:

As our world is darkened by ambition, aggression, and injustice, may those in authority be continually strengthened to do what is best for all your people. We pray especially for the President and President-elect; for those serving in the Armed Forces of the United States; and for the safety of the innocent amid war and strife.

Light of Christ, shine in every heart.