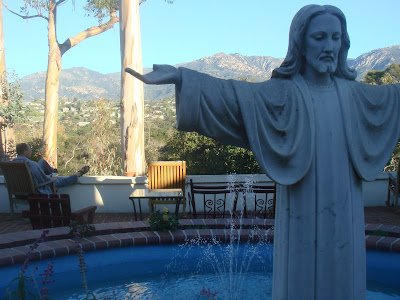 The sun-drenched hills above Santa Barbara didn't look so peaceful in mid-November, when fires destroyed 130 homes as well as the Mt. Calvary monastery and retreat house, California home of the brothers of the Episcopal Order of the Holy Cross. The monks are now living down the hill at the retreat house of the Sisters of the Holy Trinity, another Episcopal order, which is located right next door to the Santa Barbara mission. Five clergy buddies and I spent two days with them this week as well as with some Franciscan brothers and sisters from northern California and one young monk from Brazil-- also all Episcopal. Monasticism runs deeper in our denomination than many people realize.

As he told me how to turn off the lights in the St. Mary's common room before going to bed, one of the Holy Cross brothers said he'd arrived at Mt. Calvary in October fro 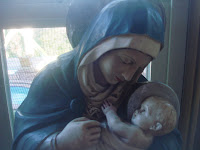 m one of the order's three other monasteries. He hadn't even had time to unpack his moving boxes before losing everything he owned in the fire. "Even now, we'll be talking, and someone will say that he has something in his room, and then he'll remember," he said with a sad smile. As the brothers mull whether to rebuild Mt. Calvary, they contribute graciously to St. Mary's hospitality, preparing hearty meals -- corn chowder, avocado and bean salad, pancakes, peppery chicken and mushrooms in cream sauce -- and offering services of morning prayer, compline (the nighttime service), and Holy Eucharist each Friday through Wednesday.

A couple of days at a retreat center like St. Mary's is such a relaxing and affordable experience that I'm amazed more people don't partake. Of course you make your own coffee and twin bed and usually have to walk down the hall to the bathroom. But just imagine the quiet and beauty of the buildings and grounds, the squeaky wood floors, the funky old furniture and generous library and, on a retreat like ours, the long, languorous conversations with friends and colleagues. It all contributes to a gently gathering sense of peace and wholeness.

Even when the stress of the world intrudes -- it's hard to escape the BlackBerry these days, and the Holy Nativity sisters offer wireless internet access in the main house -- the world's demands feel considerably more manageable, especially when, from after compline until after breakfast, guests observe the house's rule of silence. It's hard to worry about saying or doing the right thing when you realize that you don't have to do or say anything at all.
By Fr. John at 8:13 PM