Tell Laura They Love Her (After All) 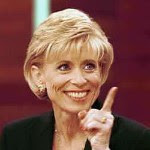 Surveying the right's underwhelming reaction to the legalization of gay marriage in Iowa and Vermont, Frank Rich at the New York Times detects a sea change:

On the right, the restrained response was striking. Fox barely mentioned the subject; its rising-star demagogue, Glenn Beck, while still dismissing same-sex marriage, went so far as to “celebrate what happened in Vermont” because “instead of the courts making a decision, the people did.” Dr. Laura Schlessinger, the self-help media star once notorious for portraying homosexuality as “a biological error” and a gateway to pedophilia, told CNN’s Larry King that she now views committed gay relationships as “a beautiful thing and a healthy thing.” In The New York Post, the invariably witty and invariably conservative writer Kyle Smith demolished a Maggie Gallagher screed published in National Review and wondered whether her errant arguments against gay equality were “something else in disguise.”

More startling still was the abrupt about-face of the Rev. Rick Warren, the hugely popular megachurch leader whose endorsement last year of Proposition 8, California’s same-sex marriage ban, had roiled his appearance at the Obama inaugural. Warren also dropped in on Larry King to declare that he had “never” been and “never will be” an “anti-gay-marriage activist.” This was an unmistakable slap at the National Organization for Marriage, which lavished far more money on Proposition 8 than even James Dobson’s Focus on the Family.