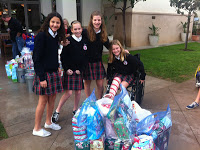 The morning after the Newtown massacre, I heard a fire engine coming from behind as I drove along Rancho Santa Margarita Parkway toward the church I serve in south Orange County, California. I pulled over and watched it roar past, a blur of Christmas red.

At such moments, does your mind work like mine? If I’m near home, at first I think, “Maybe they’re going to our house!” If I’m near work, I think, “I hope there’s nothing wrong at St. John's!” Once these brief visions of incendiary toasters or Advent wreaths recede, I pray that everyone is okay wherever the firefighters are headed and give thanks for all the people in the world who make a vocation out of rushing toward danger.

We’re usually not the victims when horror strikes – until we are. On the Monday after Newtown, I tried to imagine what St. John’s School parents were feeling at drop-off. Their heads probably assured them that their children would be safe on our campus. Their hearts warned that the parents of Sandy Hook Elementary School had made the same assumption.

To the extent that safety is a state of mind, we’re in more a dangerous state this Advent and Christmas. That same Monday at least enabled St. John’s School to thank some of those who risk their lives on our behalf. U.S. Marines and their families visited campus for a chapel service and meetings with our students. Kristen Lanham, Cindy Farnum, and other organizers of our annual Operation Christmas Spirit sent our guests back to Camp Pendleton with presents, food, and clothing.

Preaching in a church packed with students, colleagues, and our guests, I told my fire engine story in the hope of reassuring children who had been hearing about Newtown all weekend. While bad things do happen, we’re pretty safe. If we’re still worried or scared, it helps us feel better when we count our blessings, care for someone else who’s suffering, and give thanks for those from Afghanistan to the neighborhood firehouse who pledge themselves to safety and service.

Worry and fear won’t keep tragedy away, but planning and preparation may. At St. John’s School, we have regular fire and lock-down drills. At the national level, an urgent conversation is underway about the gun violence that marred this year more than any in recent memory. What can we do as one nation under God to deter such acts? It won’t be a thorough conversation unless everything’s on the table, including mental health education and treatment, the prevalence of semiautomatic weapons, and the way video game and television violence influences troubled people.

What might help most of all would be paying more and better attention to one another in our fractious, individuated society. Faith communities such as St. John’s can contribute by modeling how to conduct civil dialogue on difficult issues, build and sustain mutually supportive communities, and care for the lonely, despondent, and marginalized.

Thinking there’s nothing we can do after a moment like Newtown would inflict tragedy on tragedy. As Charles Dickens wrote in A Christmas Carol, “Any Christian spirit working kindly in its little sphere, whatever it may be, will find its mortal life too short for its vast means of usefulness.” Every one of us is part of the solution, capable of accomplishing far more of God’s just and righteous purposes than we usually imagine. But how could it be otherwise at Christmas, as we prepare to celebrate our enlightenment and empowerment in Emmanuel, God with us?

This post originally appeared in the Vaya Con Dios, the St. John's Episcopal Church newsletter.
By Fr. John at 11:59 AM No comments: