“[A cutlass-wielding thug] held up the man’s hand for the people, like a sort of trophy,” [a] witness, a local teacher, said Thursday in a telephone interview from Ansongo. “He said, ‘God is great.’ It was barbaric.”

One L And The Big J


I'm not going to get too sentimental, like those other sticky valentines. I was in San Diego, not far from here, when I first heard "Alison" in 1976. It's one of those songs. Elvis Costello, shown performing in 2003, won't say who it's about. If you have any doubt about the underlying emotion, listen for the song he twins it with.
Hat tip to No Depression
By Fr. John at 8:47 AM No comments:

Julia And The End Of 60-Hour Days 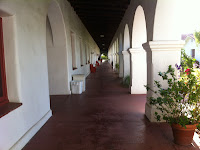 If you want to have weird dreams, do what I did last night. Be the only guest in a large Roman Catholic retreat center, and stay up until 2 a.m. reading a novel about the apocalypse.

In Karen Thompson Walker's The Age Of Miracles, the rotation of the earth begins to slow, for reasons scientists never quite discern, though the consequences of the resulting 60-hour days and nights, especially dying species and resource shortages, quickly bring climate change to mind. It reminded me (and has reminded others) of Tom Perrotta's The Leftovers, about an also-inexplicable Rapture-like event that defies tidy theological explanations, since many sinners ascend while almost everyone who's read all the Left Behind novels remains.

Both books are really about how people living benign suburban lives contend with the unfathomable. In Thompson Walker's, most comply after the president announces that the U.S. will continue to use the 24-hour clock, and minute-hand McCarthyites harass those who insist on living the circadian way. All the eucalyptus trees (presumably including these here at Mission San Luis Re 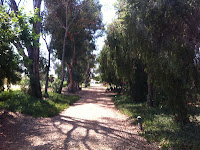 Meanwhile Americans keep playing baseball, and Thompson Walker's heroine, a sixth grader named Julia, gets dumped by her best friend and falls in love with the boy she's been staring at in math class. While you're not sure if the human race will survive, you may be confident that adolescence is eternal. Among many others in this great first novel, there's this wise observation about the fears sometimes ruling young people that I hope we'll continue to struggle against until the end of days does come:

It was that time of life: Talents were rising to the surface, weaknesses were beginning to show through, we were finding out what kind of people we would be. Some would turn out beautiful, some funny, some shy. Some would be smart, others smarter. The chubby on 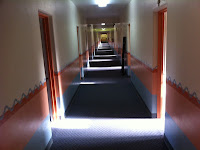 es would likely always be chubby. The beloved, I sensed, would be beloved for life. And I worried that loneliness might work that way, too. Maybe loneliness was imprinted in my genes, lying dormant for years but now coming into full bloom.

Just beautiful. Except when I walked down the hall to the bathroom in the middle of the night, I expected to run into Jack Nicholson saying "Here's Johnny!" But dawn arrived right on time (a little too early, actually), and the cheerful friars' Cheerios were waiting.
By Fr. John at 10:05 PM No comments: 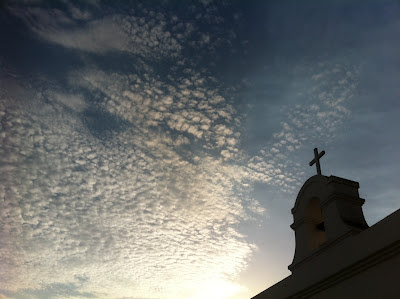 I've spent the last two days at the retreat house of the Mission San Luis Rey near Oceanside, California, established by the Franciscans in 1789 and operated by them to this day. Two nights, $200, and that includes three hearty, long walk-inducing meals a day. Information about the Mission and retreat center here. 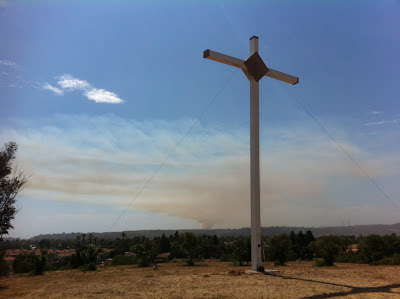 This afternoon prayers were ascending, as Bishop Diane Jardine Bruce likes to say, for three firefighters injured while tangling with this brush fire near the entrance to Camp Pendleton, the Marine base. The fire was a little under five miles from the high point on the Mission grounds. I can still smell the smoke as I work in the library Thursday evening. 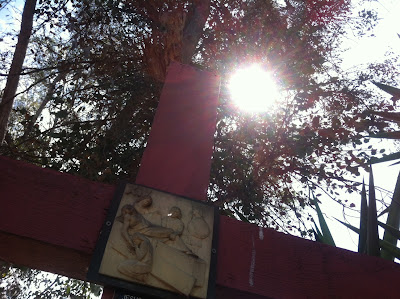 Walking the Stations of the Cross, as I did in the eucalyptus grove behind the mission, can take on deeper meaning after you've trod the Via Dolorosa in Jerusalem. Today it felt more personal than usual. Jesus falls the first time. Hasn't God's grace abounded when I've failed, when I've hurt others or let them down? Jesus falls a third time. What do we tell people whose suffering will have no end? Jesus comforts the women of Jerusalem. When have my preoccupations deafened me to others' needs? Veronica comforts Jesus. Why is it easier for some of us to give than accept? Jesus is stripped of his garments. Why do we worry so much about the opinions of others? 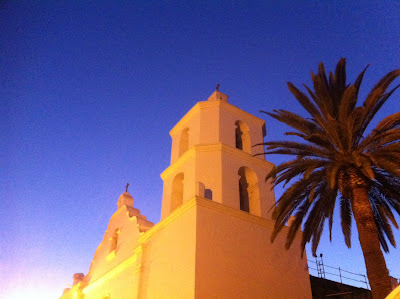 The main church, which I photographed Wednesday at dusk, is closed while workers accomplish an earthquake retrofit. Built in 1811, it's the third church building on the site. 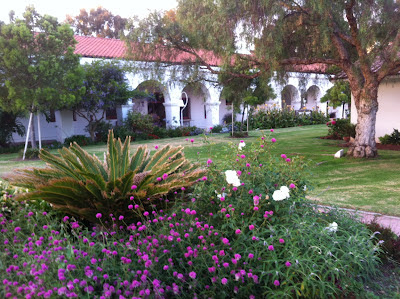 The grounds, serene and quiet, are home to the oldest pepper tree in California, or so it told me. 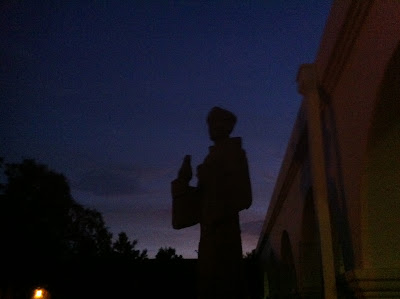 Other than St. Francis, I don't have any pictures of people. Waving a smart phone at fellow retreatants seems inapt. But there was Br. Tom Herbst, all the way from the Franciscan International Study Center in Canterbury, who gave a spirited talk this morning about the incarnational heart of Franciscan spirituality. He said St. Bonaventure, on whom he's an authority, called the cross a "furnace of love." His talk inspired my intimate walk with our suffering LORD. Jackie and Br. Chris, who welcomed me so graciously. Suzanne, with whom I had the run of the place Wednesday and who can't wait to come back. The two Long Island natives, now living in San Diego, who lingered so long chatting after Br. Tom's evening reprise that they needed my key to escape the grounds.

And the Loyola Marymount students who arrived this afternoon and have set the place alight with shouts and laughter. Some of the kids are having intense theological and social conversations in the common room. The rest are chasing each other around with a soccer ball. I asked a group of young men what they were working on. "Bonding," said one. Is there anything better than the sound of happy children on a summer evening?
By Fr. John at 8:34 PM No comments:

They're Not Your Father's Young Republicans 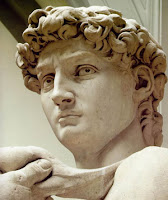 In one sentence, Ephesians 4:1-3, St. Paul teaches us how to make a lifetime of good decisions. Is it wise? Does it feel right? Does it promote unity? We can't always come up to Paul's standards, especially when these values come into conflict. David famously failed the test. This week at St. John's, though, we were thinking not of King David but teenaged David and two high school sophomores affiliated with out community, Ryan Janics and Ben Zauri, who are brimming with promise as David was while facing down the toughest challenges of their and their devoted parents' lives. My sermon for the 10th Sunday after Pentecost is here.
By Fr. John at 7:25 PM No comments:

An Appealing Vision Of Adult Life

According to Madeline Levine, "authoritative parents" make the rules and provide a safe environment in which children can make their own mistakes, learn, and achieve -- making sure they do their math homework, for instance, instead of doing it for them. We also teach by the way we live:

Parents also have to be clear about their own values. Children watch us closely. If you want your children to be able to stand up for their values, you have to do the same. If you believe that a summer spent reading, taking creek walks and playing is better than a specialized camp, then stick to your guns. Parents also have to make sure their own lives are fulfilling. There is no parent more vulnerable to the excesses of overparenting than an unhappy parent. One of the most important things we do for our children is to present them with a version of adult life that is appealing and worth striving for.

You Didn't Score That

Because of his carelessness with a demonstrative pronoun -- it depends on what the meaning of "that" is -- Barack Obama spent a couple of weeks getting basted by the GOP, which accused him of believing that rugged U.S. entrepreneurs didn't get ahead by themselves. But somebody forgot to send Rick Perry the talking points. Offering to campaign for Mitt Romney in the fall and perhaps angling for a speaking role at the Republican National Convention, Perry said:

Most running backs know the reason they were successful is that there was a real good interior lineman who was looking for holes. I see that as my role.