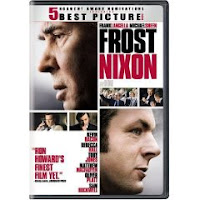 When director Ron Howard visited the Nixon Library in September 2007 to film scenes for "Frost/Nixon," his PR company filmed interviews with President Nixon's last chief of staff, Kathy O'Connor, and me about the Library and its genesis as a privately run institution. (It's now part of the National Archives.) That's Kathy and I below with Frank Langella, who skillfully portrayed our former boss. 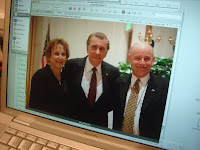 The "Frost/Nixon" DVD came out this week with a brief special feature on the Library that Kathy and I essentially narrate. Quite a thrill and an honor for a couple of old Nixon hands.
By Fr. John at 9:24 PM