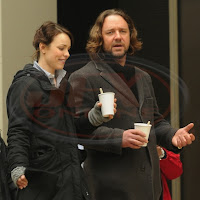 I can't write about "State of Play," the last of the great newspapers movies, without giving away the last scene: Reporter Cal McAffrey (Russell Crowe) and blogger Della Frye (Rachel McAdams) striding together through the darkened (hadn't they paid the light bill?) newsroom of the Washington Globe after filing their big story. From behind, they might as well be Cary Grant and Rosalind Russell in "His Girl Friday." The image evokes the hope that solid reporting will persist even though printed newspapers are dematerializing. Fat chance.

When we first meet Cal and Della, he's eating Cheetos and working on a 16-year-old computer in a cubicle piled high with junk, while she's sipping Perrier and perching delicately in front of her flat-screen monitor -- although failing, along with her colleagues on the "on-line side" of the operation, to repay the Globe's investment in their superior equipment by providing sufficient financial energy to save the dying newspaper from being sold to "Mediacorp." Their hard-nosed editor, played by Helen Mirren, ink still pumping in her veins although somewhat anemically, lets them collaborate on a story about a greedy, menacing company called "Pointcorp," aka Blackwater. Cal teaches Della how to pound the pavement, break the law in pursuit of the truth, and drink Jack Daniels, while she...Actually, she doesn't teach him anything. In this movie, if nowhere else, print trumps pixels. "This is such a big story," she says to him with a smile, explaining why she won't be blogging about it, "that people probably need to get ink on their hands when they read it." It's like when Christina Applegate hands the microphone back to Will Farrell at the end of "Anchorman," except it's serious.

Based on a BBC miniseries, "State of Play" is seriously in love with the newspaper business. It brims with quotations from "All the President's Men" -- a suspenseful scene in a parking garage, three (count 'em) references to the Watergate office building and even a visit to one of its suites, and the Globe newsroom itself, though it's drab and dark compared to Alan J. Pakula's recreation of the 1972-era Post. The end credits roll over images of the Globe's rolling presses as we listen to Creedence's "Long As I Can See The Light." The idea is that we'll be lost in the dark without old-school reporters like Cal who have the training and tenacity to follow stories about corporate and congressional crooks and their $50 billion private armies.

Throughout the movie, we see black helicopters crisscrossing the Washington sky. None of them lands or plays any other role in the story. You just assume it's Dick Cheney and Don Rumsfeld flying around, destroying democracy. The anti-Bush resonances end up being of secondary importance. In another movie making the same good points about the indispensability of well-reported journalism and the threat posed to it by radically changing media markets, the dangerous chopper passengers could just as well be a big-spending President and Speaker of the House -- not that anyone in Hollywood would probably want to make it.
By Fr. John at 10:23 PM