Many Bodies, One Body 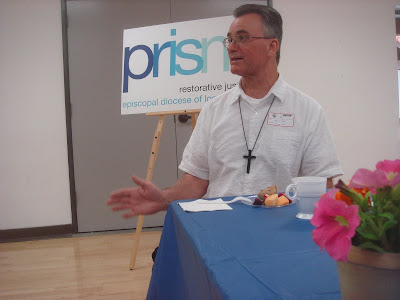 Dennis Gibbs spends most of his working days in the Twin Towers county jail in downtown Los Angeles, where he serves as the senior Episcopal chaplain. Iowa-born and now preparing to be ordained as a vocational deacon (a sacramental servant of God's people), Gibbs' own encounters with homelessness, crime, and punishment as a younger man add up to the gift of acute empathy during his encounters with prisoners. "I'm often struck at how decisions made when kids are six, seven, or eight years old can actually play a role in how these guys end up," he said Thursday during a meeting at St. John's with a group of Episcopal clergy. 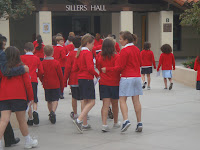 As Dennis talked, the life of our busy school swirled around us -- elementary students heading from chapel back to class, and younger students delighting at being momentarily incarcerated with rabbits, chickens, and other assorted livestock as part of an annual pre 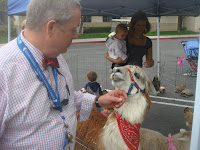 Jim and his colleagues take justifiable pride for viewing every student, and every student's story, as precious and unique. A few steps away, Dennis Gibbs was saying, "For every inmate, there's a story." The same is true of their victims and families, constituencies also served by our Diocese's restorative justice ministry, called Prism. Every Sunday, partnering with the Roman Catholic archdiocese's own inmates' ministry, Prism conducts 16 services in LA county's prison system, using altars set up at the guards' stations in circular cell blocks called pods. The chaplains invite sheriff's deputies (many of them kept from church by their 16-hour shifts) to take communion alongside the prisoners, gently undermining the prevailing argot of prison life whereby guards call the prisoners bodie 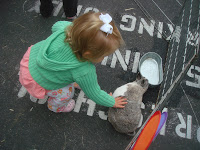 s -- "as in 'Some bodies are coming through'," said another chaplain, Greta Ronningen, who accompanied Gibbs to St. John's. For those sacred moments around the altar, at least, many bodies are one body in Christ.

Neither Gibbs nor Ronningen has any illusions about the prisoners (some 25,000 are in LA county jails on any given day) or the odds against them. Those evincing swagger and pride, she suggested, probably aren't touched by Prism at all. "But so many are humbled," she said. "They say, 'Ma'am, I'm really going the wrong way. I'd like to find my way out of this to a life I can be proud of. These men are on their knees praying. It's like a honeycomb of starving men. We're carrying in as much spiritual food as we can carry." For some, the need to confess is almost overwhelming, she said. The Rt. Rev. Chester Talton, suffragan bishop of our Diocese and a strong supporter of Prism, will be in the Twin Towers taking confessions next month, and more priests are urgently needed for the ministry.

Prism also offers Bible study and meditation classes for prisoners and guards alike. On the outside, a "healing retreat day" for crime victims is coming up. Gibbs is making the rounds asking churches and individuals to contribute not only money for all this work but also altar linens and fixtures, prayer books, and Bibles. He wants the prison masses to be conducted with the same exacting attention to detail as when priests and altar guilds collaborate i 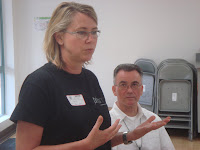 n our churches. "We want to show the prisoners as well as say to them, 'You are as important to God as anyone'."

The heart of prison ministry, Gibbs said, is one-on-one pastorship -- the simple, timeless, countercultural ministry of presence and listening. "Sometimes a guy will say, 'I've never had anybody sit down and just listen to me'," Gibbs says, adding that sometimes on a busy day of ministry he can't get to all of those among the 196 prisoners per pod who would like a visit. "Next time I'll apologize to a prisoner that I couldn't get to him before, and he'll say, 'That's okay. We saw you on the other side, visiting those guys. That was enough for us'."
By Fr. John at 11:42 AM