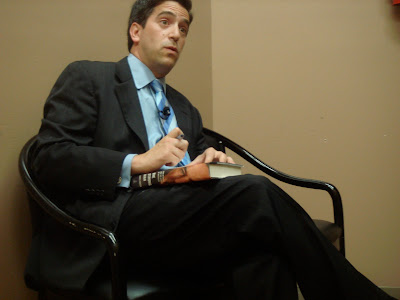 Seventeen years in the writing, the product of 250 interviews and his painstaking study of records no other journalist or historian has ever seen (or evidently asked to see), James Rosen’s just-published The Strong Man: John Mitchell and the Secrets of Watergate (Doubleday), which brims with new information about Watergate, ought to be the political junkie event of the season. Before a crowd of 70 at the Nixon Library this evening, the Fox News Washington correspondent and first-time author talked about the years after President Nixon’s resignation when journalists were desperately hungry for new revelations, especially that hoped-for tape or document that would explain the Cold War era’s greatest political scandal once and for all.

So using the Freedom of Information Act, Rosen dug deep for those new revelations. He was the first to see all the records of the Watergate special prosecutor and the transcripts of the Senate Watergate committee’s executive sessions. “Now I stand here able to talk about Watergate with a breadth and depth unequaled by any other human being,” he said with a wry smile, “and no one wants to talk about it anymore.”

Nor, it seems, review it. Though Rosen has written the only biography of the only attorney general in American history to do time, the New York Times still hasn’t found the time to review The Strong Man. It’s not that it contains no smoking guns. But it may be that some would prefer if Rosen had found somebody else’s fingerprints on the triggers. “What did the special prosecutor know and when did he know it?”, one of Rosen’s key questions, may not be of pivotal interest to the Times, even though Rosen demonstrates conclusively that ambitious prosecutors deep-sixed evidence that tended to undermine the cases they were making against Mitchell and the President.

Even more inconveniently, Rosen concludes that not Mitchell but former White House counsel John Dean, now a darling of the left for his Bush- and conservative-bashing books, is the most likely author of the Watergate break-in, which occurred 36 years ago tonight. Dean has called Rosen’s findings “pathetic,” and he and Mrs. Dean have denied any connection with the lurid story about a Washington prostitution ring that lies behind the revisionist theory of the genesis of the Watergate break-in first proffered in the early 1990s by Len Colodny and Robert Gettlin in their book Silent Coup.

Yet the fact remains, Rosen said tonight, that the only information gleaned from the Watergate bugs came from a phone in the office of a functionary responsible for looking after visiting Democratic state and county chairmen. The conversation was mostly about sex. Nothing was picked up from the phone of Democratic national chairman Larry O’Brien, accepted by history as the target of the bugging because of the White House’s preoccupation with his links to industrialist Howard Hughes. O’Brien’s phone was completely out of reach of the line-of-sight bugs, and O’Brien was known to be out of town for most of the three weeks the bugs were in place.

Meanwhile, back at the White House, Dean put a bug in the President’s ear to say that Mitchell supported a coverup even though Dean and Mitchell had evidently not even discussed the matter.

Seemingly not bugged by the relative lack of attention being paid to The Strong Man, at least so far, is its patient, methodical, quietly brilliant author. As it happens, Rick Perlstein’s much more convenient Nixonland has ended up being the Nixon book of the hour. It received a front-page review in the Times Sunday book review, and by George Will, no less, thus putting RN in his accustomed position of being simultaneously hammered and with equal ardor by ideologues of the left and right.

Edged out by Perlstein, Rosen is biding his time. Recently dubbed the funniest celebrity in Washington, Rosen — in his opening remarks and then in conversation with Nixon Library director Tim Naftali — enlivened his account of long-ago events with dead-on impersonations of President Nixon and General Mitchell. His George W. Bush is great, too. But behind Rosen’s affability is skill, will, and not a not inconsiderable measure of heart. In the mid-1980s, as a college student on Staten Island who became fascinated with the Nixon era, he realized that the author of RN’s 1968 campaign victory deserved a biography of his own. He got to know Mitchell and came to admire him for his largely unheralded accomplishments ranging from civil rights to law and order.

Rosen concludes in his book that Mitchell was guilty of only one of the ten offenses with which he was charged by prosecutors. You would think this would attract a line or two from the newspaper of record that once devoted millions of words to Mitchell and Watergate. TNN is complaining, but Rosen isn’t. It appears his greatest regret is that William F. Buckley, Jr., who gave encouragement and support to the young author in the early 1990s, didn’t live to receive an inscribed copy of The Strong Man. This sense of obligation to a mentor is a deeply impressive thing, as is Rosen’s command of the massive detail and literature of the complex scandal. The Strong Man is here now, and its equally formidable author isn’t going away.
By Fr. John at 1:20 PM No comments: