Out On the Palestinian Streets 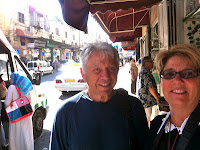 St. John's pilgrims Ed and Cathy Alosio are pictured on the streets of east Jerusalem near the Holy Land Hotel, headquarters for a week during our recent pilgrimage to Israel and the West Bank.

It was a considerable change of pace compared to my three prior trips, when our groups stayed at the pilgrim guest house of St. George's Episcopal Cathedral. This time we stepped easily into the bustling life of what Palestinians 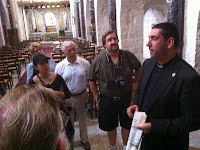 hope will be their capital someday. The main drag, Salah al-Din, was around the corner, which meant we were a few steps from newspapers, the post office, a cafe with cappuccino and croissant, a florist (where pilgrim Kathe Hayden made friends with the proprietor by showing him some arrangement tricks), soccer courts (where Bob and Steven made friends playing baseball), shops selling pistachios and za'atar (a tasty blend of herbs, sesame, and salt; try it on fresh warm bread in the morning), and delicious shawarma (think Arab gyro). 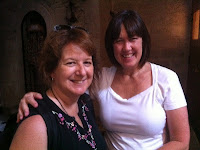 St. George's, which is finishing up with some renovations, has considerable charms. Our friend Canon Iyad Qumri took us by one morning for a visit with the new cathedral dean, the Very Rev. Canon Hosam Naoum, and our LA diocese friend, Deb Neal (pictured with the Rev. Lisa Rotchford, at left), now serving as secretary to the bishop of the Diocese of Jerusalem. The beautiful cathedral close, on a quiet stretch of Nablus Rd., was a longer walk than our hotel from the Damascus and Herod gates, which we pilgrims used for our daily and nightly excursions to the Muslim, Christian, Armenian, and Jewish quarters.

At the comfortable Holy Land, presided over by its courtly Muslim owner, Zuhair Al-Amad, and his good-humored and patient reception director, Fawaz Takrouri (whose young assistant tore himself away from watching the Euro 2012 tournament in the hotel bar long enough to sho 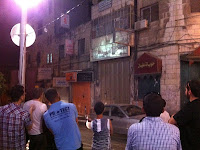 w me some card tricks), we couldn't help feel more connected to the city and encouraged to explore and rub shoulders, observe the pace and style of commerce, and indulge our curiosity about varying styles of women's dress according to Muslim tradition (a preoccupation of all western pilgrims) as people walked to and from jobs and shopping.

One night Kathy and I and pilgrims Christian, Shannon, and Damian Kassoff were exploring when, shades of Greenwich Village, we encountered an art 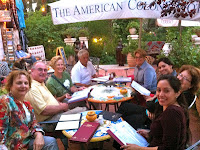 happening -- a group of young people wheeling a projection system along the sidewalk looking for blank walls for their screen. We also organized a pilgrimage to the historic American Colony Hotel, where $130 bought a round of drinks and the privilege of imagining we had spotted the ghosts of Edward Said and Christopher Hitchens drinking and laughing at a table in the corner of the garden.