Beit El Than Nothing 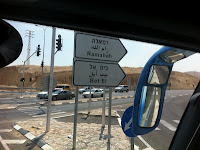 While we were in the Holy Land last week -- around the time I saw this sign on the Jericho-Jerusalem highway pointing both to Ramallah, the Palestinians' headquarters, and Beit El, an Israeli settlement on the occupied West Bank that's one of the thorns in the Palestinians' side -- there was a similarly ambiguous development in the Middle East peace process. A few dozen Israeli families peacefully vacated buildings in a Beit El neighborhood called Ulpana that the country's high court had deemed illegal (good news). Then the government announced it was adding 350 residences to other settlements, including 300 in Beit El itself (which sounds like bad news, since it adds up to a net increase in West Bank settlers). The New York Times reported:

[W]hile Palestinians and their supporters saw the court ruling as a moral victory, the practical result is an expansion of the settlement enterprise. Several experts said the agreement further diminishes the prospects for a two-state solution to the Israeli-Palestinian conflict, and some saw the deal as a sign that [Israeli Prime Minister] Netanyahu was leaning toward a unilateral rather than bilateral approach to the issue, with Israel essentially defining the borders of a future Palestinian state.

On Sunday, the justices relented a bit and said the illegal buildings didn't have to be demolished until November. That's Israel (and often democracy) for you -- one step forward, .95 or 1.05 of a step back. No matter when the homes are demolished, the Ulpana operation is scant cause for optimism. Getting Beit El's 5,600 residents to leave as part of a two-state settlement would probably not go as smoothly. Most are orthodox Jews, including many Rus 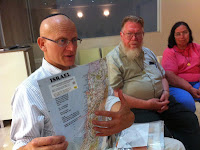 sian emigres, who consider their home part of greater Israel. The site's association with the great patriarch Jacob would make things especially complicated on the day the IDF was sent to roust the townspeople.

To get us started, Yarden surveyed the vast Talmudic landscape of Israeli opinion on security and the peace process, helping us understand that there's a legitimate-sounding response to every opinion and nostrum offered by foreign visitors who've been watching the news or reading the paper and decide we' 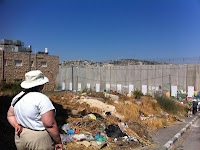 ve figured it all out. He especially stressed taking care about our terminology. When someone mentioned the controversial separation wall, which we'd seen the day before at Bethlehem, he reminded us that forbidding Berlin Wall-like structures comprise just five percent of the barrier dividing Israel from the West Bank. Security fence, he said, would be a less-provocative description, since its construction (if not all of Israel's opportunistic choices about its location) seemed justifiable as a security measure during the second intifada in 2000-04.

On the other side of the debate are Israeli hawks who oppose current U.S. policy, which calls for Israel to return to its 1967 borders with land swaps. Fretting that pre-June 1967 Israel was only a little more than nine miles wide at its narrowest point, critics claim the Obama administration and Palestinians want to impose indefensible "Auschwitz borders" on Israel -- faili

ng to acknowledge, Yarden noted, that she capably defended the same borders in 1967's Six-Day War, when Israel won the West Bank from Jordan, Gaza and the Sinai from Egypt, and the Golan Heights from Syria.

As for the settlements, Yarden insists that they haven't yet doomed the two-state solution. He said that most settlers aren't religious zealots clinging to their birthright in Hebron or the rock where Jacob purportedly laid his head the night he dreamed about his ladder. Of the settlement population of 500,000, about 70% actually live in the suburbs of Jerusalem, many having been attracted not by ghostly voices of the patriarchs but the 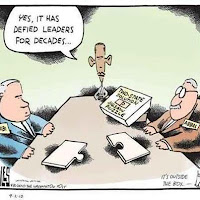 lure of cheaper, government-subsidized housing. Yarden said that if these 350,000 want their homes to stay in Israel, all Israel has to do is give up 1% of its territory elsewhere along the border.

The problem is that many of the remaining 150,000 live in communities like Beit El that are deeper in the West Bank, often complicate the geographical integrity of Palestine, and in some cases shelter residents who might not leave peaceably. Know all that, this pilgrim -- still taking care not to take sides -- hopes that Israel will stop building and expanding settlements and the Palestinians will stop saying no.