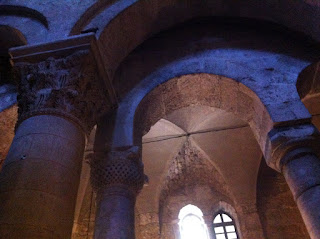 Even in the digital age, a group of pilgrims in Israel and the West Bank is likely to end up feeling set apart from the world – hermeneutically sealed, you might say. Are those Crusader or Byzantine ruins atop Mt. Tabor in Galilee, or a combination of both (which is usually the right answer)? The cassocked monk who just brushed by us in Jerusalem's old city -- Armenian or Greek Orthodox? Does any of Queen Helena's 4th century building remain in the Church of the Holy Sepulcher (yes, or so we were told; the center arch in the photo above)?

It's not that we didn't go on-line. But when we visited Wikipedia, it was to learn more about the history of the Freres Blanc, custodians of St. Anne’s Church and the pools of Bethesda, and to try to figure out which of the eight purported sites of the biblical Emmaus we had actually visited on Saturday morning.

We weren’t totally hermetic in our coenobiticality. News of pastoral crises quickly reached us – two friends’ unplanned hospital visits, another’s home being threatened by fire in Colorado Springs. We also heard in real time about the political firestorm sparked by 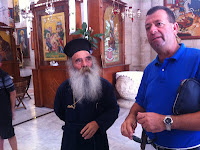 the Supreme Court's health care opinion. But what I didn't learn until we were en route to LAX (and I opened the new issue of the Economist that had materialized on my Kindle) was that the walls bordering one of the sites we visited last week in Nablus on the West Bank, Jacob’s Well, had recently been shot up, the result of internecine Palestinian tensions.

The incident notwithstanding, I'm glad we didn't skip our Jacob's Well stop, which proved to be a favorite for several of our St. John's pilgrims. Because of Palestinian Authority reforms and improving economic conditions, the West Bank has been peaceful for the last few years. When there is talk these days of a third intifada, or popular uprising, it's about the chances of an armed struggle within the Palestinian movement between Fatah, which is working constructively with Israel, and Hamas, still officially dedicated to Israel's demise:

“There is no political horizon,” say disgruntled Palestinians. They increasingly question the point of the PA. It has failed to usher in a Palestinian state, and appears powerless to prevent Israeli military incursions or the relentless expansion of Jewish settlements on the West Bank. “All the windows are closed, and the political elite has no keys to open them,” says Raid Nairat, an academic. The West Bank’s 30,000 security forces seem unkeen on a recent quest for reconciliation between Fatah and Hamas that would force them to share power. Their recent round-up of 150 Hamas men helped dampen hopes of a deal.

So there are some more roadblocks on the peace highway, more rungs on Jacob's ladder. It's hard to imagine Fatah and Hamas sharing power (until their goals converge), Israel making a deal with ju 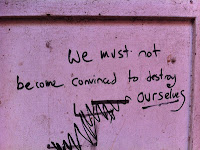 st Fatah (since it would reasonably assume that Hamas would undermine it), and Israel making a deal with a united Fatah and Hamas (unless Hamas permanently renounces jihad against Israel). A Palestinian civil war might actually be welcomed by those who think it would take the pressure off Israel to make peace. Better to hope that Hamas will be pulled to the center by its ongoing nation-building work in Gaza and the election of a Muslim Brotherhood president in Egypt who is fully committed to the peace process.
By Fr. John at 6:01 PM