What Israel Is Learning In Kindergarten 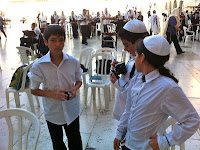 The debate in Israel about how many Arabs and ultra-orthodox haredim should be expected to serve in the military draws attention once again to the country's shifting demographics. Jodi Rudoren reports:

While Haredim account for less than 10 percent of Israel’s seven million citizens, and Arabs 20 percent, their high birthrates mean that about 46 percent of today’s kindergartners come from the two groups, growth that is “challenging the basic formula” of Israeli society, according to Aluf Benn, editor of the left-leaning newspaper Haaretz.

“These groups don’t want a larger slice of the pie, they want a different recipe,” Mr. Benn said in an interview. “If Israel defines itself as a Jewish democratic state, the Arabs would do away with the Jewish part, and the ultra-Orthodox at least in their dream would get rid of the democracy. They respect the authority of the rabbis.”

Photo: Schoolchildren (including a girl) at the men's section of the Western Wall in Jerusalem, June 2012
By Fr. John at 3:39 PM