Unity And Alienation And Unity 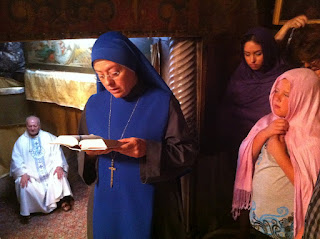 If you go to a Roman Catholic church in Anaheim, but you're not a Roman Catholic, the priest might not want to serve you Holy Communion. While he's not allowed to refuse if you insist, it's technically against canon law. And yet on Saturday in Bethlehem, all we St. John's pilgrims, though most are Episcopalian, were communicated without any hesitation by an Italian priest during a solemn early-morning mass in the grotto associated with Christ's birth that is sheltered by the Church of the Nativity -- a 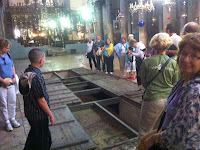 moment of unity in Christ that felt, at least to me, every bit as powerful as the first Pentecost.

The church is one of three constructed in fourth-century Palestine under the direction of Helena, mother of Constantine the Great. You can still see her workers' beautiful mosaics preserved a meter or two beneath the church's modern floor. Today Roman Catholic and Greek and Armenian Orthodox Christians share its care and administration. It's generally in the news when people are shooting at each other or on Christmas. We St. John's pilgrims celebrated our Christmas early by singing "O Come All Ye Faithful" in the St. Joseph Chapel near the grotto, where pilgrim Damian had a contemplative moment.

Then thanks to our friend Iyad Qumri's peerless contacts, the Franciscans, Rome's traditional stewards in the Holy Land, invited us to attend mass with some pilgrims from Italy. The priest (was he visiting, or based 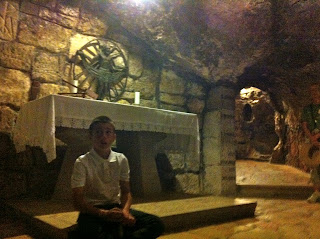 here? I don't know. I didn't ask. This is the Middle East) celebrated in Italian, but the forms of the Holy Eucharist liturgy are familiar enough that we could follow along and say the responses in English. We weren't sure about the gospel reading until the priest said, "Non vi preoccupat (don't be worried)," when we realized we were hearing Jesus's teaching in Matthew 6 about the lilies of the field. Pilgrim Mike, whose fluency in Spanish gives him a good feel f 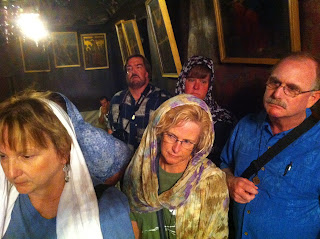 or Italian, could tell the first reading, which a nun proclaimed as pilgrims Alexendra and Brenna looked on, was from 2 Corinthians. So we all understood God's saving word, each in our own language. Did the priest know we weren't Catholic? Did he care? What would Benedict XVI think? I don't know. I didn't ask. This is the Middle East!

After the closing prayers, we each touched the star in the floor that stands for the Birth and Incarnation and creation's radical uni 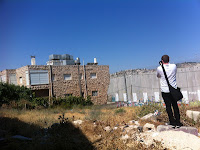 ty under God's perfect, evil-destroying love. This unforgettable moment of Christian unity happened in a town whose Christian population has dwindled to as little as 20% owing to falling birth rates, the second Palestinian intifada in 2000-04, and diminished economic opportunities. God's love may defy alienation, but the region's politics sometimes appear to defy God's love. Edward Tabash, an Arab Catholic merchant whose family have been Bethlehemites for centuries, told me that Israel's separation wall (shown here surrounding and c 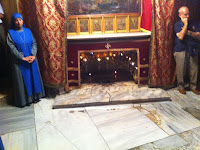 utting off a single Palestinian home) has devastated the local economy and driven thousands of Bethlehem's ablest, best-educated people to greener pastures, often abroad. So in one morning we experienced the chasm between what God wants and what we deliver. But that's okay, because after our meal in the grotto, we were invested with the power to move mountains and even walls.