When A President Helps Save Millions 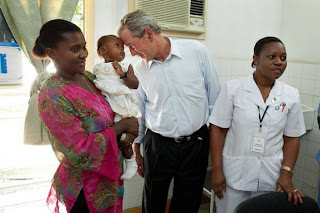 “No American president has done more for Africa,” said Festus Mogae, who served as president of Botswana from 1998 to 2008. “It’s not only me saying that. All of my colleagues agree.”

AIDS was an inferno burning through sub-Saharan Africa. The American people, led by Bush, checked that fire and saved millions of lives.

People with immune systems badly weakened by HIV were given anti-retroviral drugs that stopped the progression of the disease. Mothers and newborns were given drugs that stopped the transmission of the virus from one generation to the next. Clinics were built. Doctors and nurses and lay workers were trained. A wrenching cultural conversation about sexual practices broadened, fueled by American money promoting abstinence, fidelity and the use of condoms.

“We kept this country from falling off the edge of a cliff,” said Mark Storella, the U.S. ambassador to Zambia. “We’ve saved hundreds of thousands of lives. We’ve assisted over a million orphans. We’ve created a partnership with Zambia that gives us the possibility of walking the path to an AIDS-free generation. This is an enormous achievement.”