Anna Another Thing On Watergate 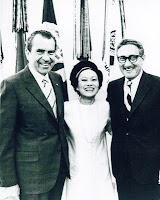 Ken Hughes argues that Richard Nixon ordered a break-in at the Brookings Institution in 1971 not because of his rage over the leak of the Pentagon Papers during wartime, as I've always contended, but because he was worried about what his political opponents might've known about his effort to torpedo the Johnson administration's Vietnam peace process.

The Brookings break-in never occurred. Still, Hughes asserts somewhat dramatically that if the House Judiciary Committee had known about the Brookings tape segment in 1974, and it had led investigators to the Anna Chennault file (she told the South Vietnam they'd get a better deal under Nixon), the articles of impeachment drawn up against Nixon might have included treason (based on the law against private citizens interfering with official U.S. diplomacy).

Hughes says there's no evidence that presidential politics were behind Lyndon Johnson's ordering a bombing halt in Vietnam a few days before the 1968 election, when Nixon was running against Johnson's vice president, Hubert Humphrey. About this, Nixon's advocates beg to differ -- for example, Conrad Black:

[P]erhaps the all-time nadir in American presidential-election ethics was achieved in 1968, when Lyndon Johnson tried to salvage the election for his vice president, Hubert Humphrey, with a completely imaginary claim of a peace breakthrough in the Vietnam talks a few days before the election. LBJ announced an enhanced bombing halt and more intensive talks in which the Viet Cong and the Saigon government would be “free to participate” (i.e., Saigon declined to attend since there had been no breakthrough).

So who did worse playing politics with war: The candidate or commander-in-chief?