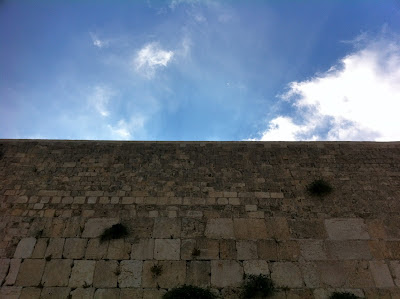 Our first full day of pilgrimage in Jerusalem? Priceless. Summing it up at the end of the day in a blog post? Thanks to jet lag, impossible. I've posted a raft of photos over on Facebook. If we're not friends, friend me. The sky above the Western Wall below was the first of three favorite sights of the day (not including the curious, sometimes transfigured visages of my fellow pilgrims). 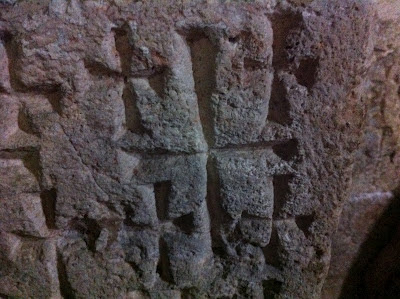 These crosses were made centuries ago in the soft Jerusalem limestone deep inside the Church of the Holy Sepulcher, carved by crusaders and other pilgrims. The arrangement of smaller crosses nestled in the quadrants of the larger, known as the Jerusalem cross, has been taken to stan

d for the four evangelists, four points of the compass, and four European nations that participated in the first Crusade in the 11th century. Our friend Canon Iyad Qumri, who's showing us around between now and July 1, offered the best explanation of all. The smaller crosses may stand for pilgrims' family members who couldn't make the expensive, arduous trip.

And these girls were heading for school this morning in east Jerusalem. If we can't make peace for ourselves, then for them. 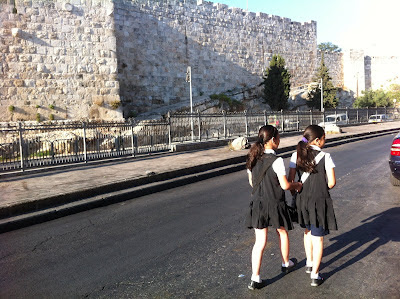