The GOP, Nixon, And "The Whole People" 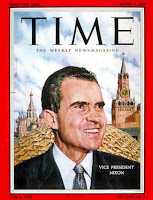 Writing in the Jan. 23 New Yorker about the state of the GOP, Jeffrey Frank raises the ghost of the last winning Republican to endorse moderation for moderation's sake:

In 1959, Vice President Nixon, speaking to members of California’s Commonwealth Club, was asked if he’d like to see the parties undergo an ideological realignment—the sort that has since taken place—and he replied, “I think it would be a great tragedy . . . if we had our two major political parties divide on what we would call a conservative-liberal line.” He continued, “I think one of the attributes of our political system has been that we have avoided generally violent swings in Administrations from one extreme to the other. And the reason we have avoided that is that in both parties there has been room for a broad spectrum of opinion.” Therefore, “when your Administrations come to power, they will represent the whole people rather than just one segment of the people.” Ten months before the general election, the increasingly angry, suspicious, and divided party of Romney, Gingrich, Santorum, and Perry seems ever more immersed in its current orthodoxies. None of the candidates, though, seem the least bit interested in even addressing how they, or their party, might actually govern the “whole people” of a fractious nation.