John Dean Was Not A Football Fan 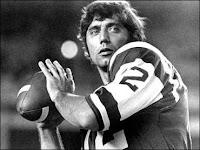 Okay, I admit it. I Googled my name and Mr. Nixon's. And I found this letter that the New York Times published on April 23, 1995:

That the famous White House "enemies list" was kept not by football fan Richard Nixon, as Robert Lipsyte suggested, but by his accuser, John Dean, ought to have been abundantly clear from Joe Namath's being listed incorrectly as a Giant. If the President had laid eyes on the list even once, can anyone imagine that error surviving?

Yeah, I remember reading that it was Dean who kept the list. In his own book Dean describes how he undertook the task of gathering information tactical to the upcoming election, how he intended his office to operate full tilt in that capacity. Even judge Sirica had a low opinion of Dean, this I'd read in my varied library of watergate books. Isn't it funny, the closer you look at Nixon's prime accusers and literary detractors, the better Nixon looks by comparison. I think Nixon was a good man, may God Bless and preserve his memory and his family.