The Second To The Last Unanswered Question 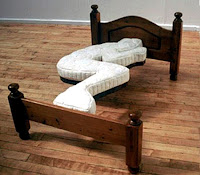 I was thinking about the fetal position this morning, because I realized I was in it while stealing an extra five minutes in bed. My knees were pressed together and tucked up and my wrists crossed against my chest. I wondered if my 57-year-old body actually remembered being in my mother's womb. I briefly considered working this into my sermon and then thought better of it. But I remained curious.

On-line, I learned this:

A whopping 41% of participants [in a survey] sleep in this curled-up manner. Women are twice as likely to rest like this and it is listed as the most common position. These sleepers are said to have a tough exterior but are still sensitive and may appear to be shy but warm up quickly.

But type this question into Google, with quotation marks, and you get no hits: "Do our bodies remember being in the fetal position?"*

*This statement is now inoperative, because if you enter the sentence, you will now be referred to The Episconixonian. We also star in this search: "Aunt Edna's Prayer".
By Fr. John at 4:32 PM