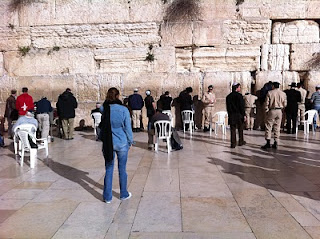 Surveying the struggle over women's rights between Israel's ultra-orthodox Jews and secularists, Benny Morris writes that on this issue, Israel has more in common with its Arab neighbors than you might think:

Israeli Jewish society continues to advance, paradoxically, in two contrary directions: The majority is moving toward a more open, secular, Western lifestyle and polity; and the (growing) minority is moving backward, toward a medieval, obscurantist life, attentive to what are perceived as God's wishes and commands. This ambivalence mirrors the development of the region's Arab societies—except, of course, that in Egypt, Tunisia, Morocco and the rest—in which it is the backward-looking fundamentalists who are in the majority and increasingly in the saddle.

The photo shows a woman standing the area reserved for men at the Western Wall in Jerusalem in January 2011.
By Fr. John at 11:05 PM